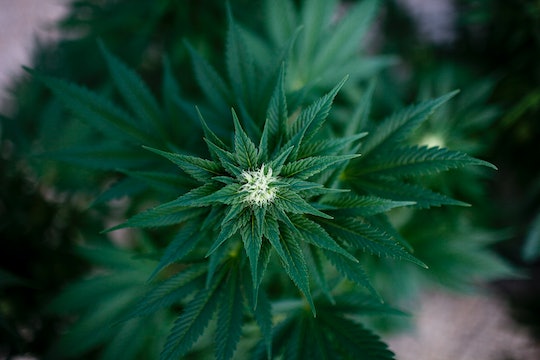 Parents & Kids Are Pretty Open About Pot Use

Social taboos surrounding marijuana are largely going up in a puff of smoke. As laws shift — more than half of states have legalized it for either recreational or medicinal use — the way families are talking about the drug is, too. Specifically, parents and kids are pretty open about pot use, a new Yahoo News/Marist poll revealed. And parents who have tried marijuana at least once in their lives are even less concerned than those who haven't that their kids will do the same. So, in many cases, families are talking freely about their own experiences — even though it's still crucial for young people to understand the risks and the unknowns associated with consuming marijuana.

According to the poll results, which come from a survey of 1,122 Americans 18 years old and older, 54 percent of people who use marijuana are also parents. And 47 percent of the parents who use marijuana said they had done so either in front of or with their adult children, or both. About one-quarter of users had done the same with their own parents. And even when these parent-child duos weren't partaking together, there was less secrecy between them than you might expect: Of the parents who toke up, 60 percent believed their kids knew this; adult pot smokers said their parents were well-aware of their habit at a rate of 72 percent.

But there are still risks associated with marijuana use. In noting that "the perceived risk of marijuana is at an all-time low," Dr. Merrill Herman, associate professor at Albert Einstein College of Medicine and an addiction psychiatrist at Montefiore Medical Center, told ABC News that using the drug can cause decreased motivation among other negative consequences. Additionally, teens may use marijuana to self-medicate, and modern iterations of the drug are more potent than the ones that their parents may have smoked.

So, it's still essential that parents talk through all the potential negative consequences of consuming marijuana in an evolving national landscape "in which marijuana increasingly is seen as acceptable, safe, and therapeutic," according to the American Academy of Pediatrics (AAP). The academy suggests that parents remind kids that marijuana can cause abnormal brain development, and that teens who regularly use it can end up with mental health disorders like addiction, depression, and psychosis. Kids should know that it's never safe to drive under the influence, and that marijuana smoke is toxic.

Smoking pot around kids can be dangerous for them as well, just as cigarette smoke is harmful to them. So, even though attitudes toward marijuana are changing, family conversations about it must acknowledge that consuming it has to be done safely and is not merely a fun past time.