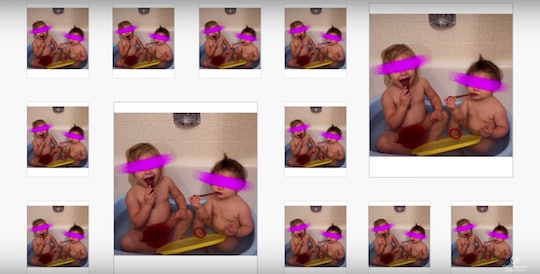 If there's one way in which millennial parents differ from previous generations, it might just be our relationship with technology. Having babies in the age of Instagram means that Google has become our go-to source of parenting advice, and social media has taken the place of baby books. Some parents have even turned sharing about their private family lives online into full-time careers, but your baby doesn't have to be an influencer to leave an online footprint. Sharing about our kids might seem totally harmless, but honestly, parents need to see this video before posting photos of their kids online. Because as the Child Rescue Coalition's recently launched @KidsForPrivacy campaign makes pretty clear, there can be serious consequences to online oversharing that well-intentioned parents rarely have any idea about.

Given that many of us grew up in the chatrooms-and-instant-messenger days of the early '00s, the notion of online predators isn't exactly new or unheard of (I mean, how many times did your parents remind you never to give out your personal information online?). But as we settled into our adult lives of iPhones, Facebook pregnancy announcements, and viral videos, social media started to feel like a totally normal aspect of being a modern parent.

To be fair, that's not necessarily a bad thing: the internet can mean community, a place for new moms and dads to get support and advice, or even just a place to store memories (I actually search my Facebook feed when I need to remember when my 5-year-old twins reached certain infant milestones, because it was the only place I actually remembered to write them down). The downside though, is that we're sharing all of this without any real idea of what the consequences could be for our kids in years to come, and sometimes, without a real understanding of the possible danger involved.

On the seriously scary end of the spectrum? That danger can take the form of sexual exploitation and abuse, and it's the reason the Child Rescue Coalition — a non-profit partnership of child exploitation investigators, police officers, digital forensic experts, prosecutors, and other experts — exists. The organization works to apprehend and convict abusers and rescue children in danger, but it also focuses on preventing abuse in the first place. And one of the ways they do that is by reminding parents how to keep their kids safe.

The goal of the @KidsForPrivacy campaign is to make parents aware that the cute or funny photos they share of their children, especially when they're posted along with certain hashtags (think, #pottytraining, #nakedchild, #bathtimefuntime, and the like), can overexpose their kids, possibly even making them a target for pedophiles and sex offenders.

It's the kind of thing no parent ever wants to think about, but given how readily many millennial parents share about their kids online, it's a totally valid concern. The Child Rescue Coalition notes, for example, that 90 percent of children have a social media presence of some kind by the time they are 2 years old, and a 2015 poll by TIME and SurveyMonkey of more than 2,000 parents in the United States found that millennials were far more likely to share photos of their kids online compared to previous generations (only 19 percent of millennials said they'd never done it, compared to 30 percent of Gen X parents).

Because posting photos online is something that happens so often, it doesn't usually feel that risky. But the reality, according to the Child Rescue Coalition, is that "the internet provides easy, anonymous, on-demand access to child pornography," in part because photos posted online by parents can end up elsewhere without their knowledge or consent. In 2015, for example, Utah mom Brittany Champagne told local news station KUTV that photos of her children she'd posted to Facebook had ended up on strangers' Instagram accounts as well as on porn sites, and that there wasn't much authorities could actually do to get them taken down.

That sounds like an actual nightmare, but it's also not the only potential consequence of posting kids' photos online. Even if nothing sinister occurs, the other aspect parents need to consider is simply their children's basic right to not have their photos on the internet — do they really want a photo of themselves in the bath to be available to anyone who might Google them down the road?

The point of the @KidsForPrivacy campaign isn't necessarily to scare parents into never sharing anything online ever again, but it is meant to be a reminder to think twice before sharing certain things, or using particular hashtags. Specifically, the Child Rescue Coalition suggests parents ask themselves whether they would feel comfortable if someone were to share that image of them, for example, or whether it's fair to allow that photo to become part of their child's digital life. And then, of course, there's the biggest question: Would I want this image of my child viewed and downloaded by predators on the Dark Web?

If you do choose to go ahead and share, though, there are some other protective steps you may want to take. University of of Florida legal skills professor Stacey Steinberg and University of Florida College of Medicine assistant professor of pediatrics Bahareh Keith told NPR that parents should know the privacy policies of the social media sites they use, and should consider sharing anonymously if they're discussing details like their children's behavioural issues, or other sensitive details that should be kept private. Another valuable tip? Consider setting up Google Alerts for your children, so that you'll be aware if their names pop up online.

As terrible as it is to think that the photos you've shared online could be used in such an awful way, the reminder is incredibly important. And whether it means that you decide not to continue sharing, or that you do so differently going forward, the more we can be aware of the implications, the better. And the safer our kids will be as a result.