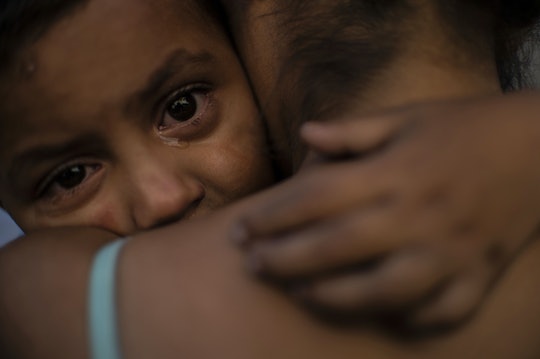 Lawyers tasked with identifying families separated as a result of the Trump administration’s zero tolerance immigration policy reported that the parents of 545 children separated at the border have still not been found, according to NBC News. A court-ordered joint status report filed Tuesday by the U.S. Department of Justice and the American Civil Liberties Union (ACLU), revealed roughly two-thirds of those parents had likely been deported without their children.

"The tragic reality is that hundreds of parents were deported to Central America without their children, who remain here with foster families or distant relatives," Lee Gelernt, deputy director of the ACLU Immigrants' Rights Project, told NBC News. "It is critical to find out as much as possible about who was responsible for this horrific practice while not losing sight of the fact that hundreds of families have still not been found and remain separated. There is so much more work to be done to find these families."

The Trump administration began formally separating migrant families at the U.S.-Mexico border — placing adult parents in federal detention centers and minor children in the custody of the Office of Refugee Resettlement (ORR) — under a “zero tolerance” immigration policy instituted in 2018. It was later revealed, however, that the Trump administration had actually begun separating migrant families in 2017 as part of a pilot program run in El Paso, Texas.

When legal action by the ACLU resulted in the court-ordered reunification of thousands of families in June 2018, families separated as part of the 2017 pilot program were not initially included. Their reunification order came in March 2019, when a federal judge ordered the pool of separated families to be expanded, Politico reported.

According to the joint status report filed in court Tuesday — and shared by CNN — responsible parties have successfully located the parents of 485 children. But authorities have yet to locate the parents of an additional 545 children. Two-thirds of those parents are believed to have already been deported back to their country of origin. While the ongoing coronavirus pandemic has hindered search efforts, according to court documents, limited “on-the-ground” efforts to locate separated parents have re-commenced in areas where health and safety conditions have allowed. According to NBC News, the nonprofit network Justice in Motion has been spearheading the physical search for separated migrant parents in Mexico and Central America.

"It’s an arduous and time-consuming process on a good day,” the group said in a statement first shared with NBC News and later posted to Twitter. “During the pandemic, our team of human rights defenders is taking special measures to protect their own security and safety, as well as that of the parents and their communities.”

But as the search process slowly limps along, hundreds of migrant children have now been isolated from their parents for roughly three years. Gelernt told NPR some children, specifically those who were pulled away from their parents when they were just babies, have spent more than half their lives forcibly separated from their parents. "People ask when we will find all of these families and, sadly, I can’t give an answer. I just don’t know," Gelernt told NBC News. "But we will not stop looking until we have found every one of the families, no matter how long it takes."