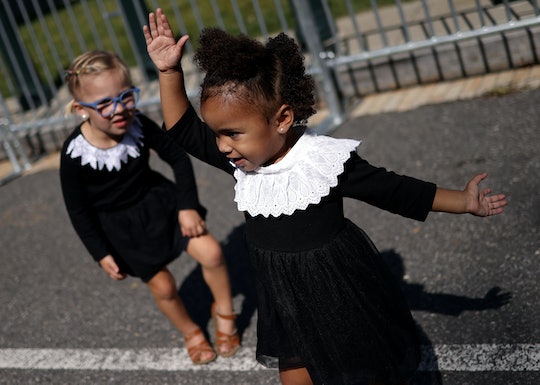 In the days following the death of a well-revered feminist icon, parents have paid tribute to Ruth Bader Ginsburg by sharing photos of their children dressed as the late Supreme Court justice. From Halloween to Superhero Day to Notable People Projects, Ginsberg's iconic black judge's robe, eyeglasses, and statement collars have long been a popular costume for young girls looking to emulate a strong and courageous woman. But to the young girls that donned her likeness, Ginsburg was more than just a costume — she was a trailblazer, a role model, and an advocate.

After more than 27 years on the Supreme Court, Ginsburg died Sept. 18 at the age of 87 due to complications from her battle with metastatic pancreatic cancer, according to the Court. In 1993, she became the second woman to have ever been appointed to the Supreme Court following her nomination by then-President Bill Clinton.

"Our Nation has lost a jurist of historic stature," Chief Justice John G. Roberts, Jr. said of Ginsburg in a statement released by the Court. "We at the Supreme Court have lost a cherished colleague. Today we mourn, but with confidence that future generations will remember Ruth Bader Ginsburg as we knew her — a tireless and resolute champion of justice."

Judging from the number of tributes that came pouring in for the late Supreme Court justice from or featuring young girls, it seems safe to say Ginsburg's legacy is well known among even the youngest generation.

"We have lost a hero," one mother tweeted alongside a photograph of her daughter sitting behind a laptop dressed as RBG. "This spring, my daughter gave her 'Notable People' presentation on RBG (of course over Zoom)."

"This is Michele," another woman tweeted alongside two photographs — one of her daughter and one of a handwritten note from Ginsburg herself. "When she was 8, four years ago, she dressed up as #RBG for her school's superhero day. This is what matters. We must never forget her, every girl must know who she was. The photo made its way to the justice's desk and she wrote her a note."

Ginsburg's note reads, "Dear Michele, you look just like me! May you continue to thrive on reading and learning. Every good wish, Ruth Bader Ginsburg."

"[Two] years ago I dressed my youngest up as Ruth Baby Ginsburg," one mother wrote in a tweet featuring a photo of her baby dressed in Ginsburg's signature black robe, lace collar, and oversized glasses. "May my daughters have the ferocity and tenacity of RBG."

"My oldest, dressed as her superhero, the Notorious RBG," another mother tweeted while sharing a photograph of her child holding a gavel while dressed in a black robe, eyeglasses, and sparkly dissent collar. "There were tears in this house tonight."

"I spotted this drawing on Clara's locker when visiting her classroom for her birthday in second grade," one mother tweeted alongside two photos — one of her daughter dressed as Ginsburg and one of a colorful report her daughter had written on I Dissent, a picture book about Ginsburg's life. "She dressed up as RBG for Halloween and @jesscigelske got her dissent earrings for Christmas. Thanks for inspiring another generation of girls, RBG. Keep dissenting."

"I cried telling my 6 [year] old who dressed as RBG last year for Halloween," one mother tweeted about having to break the news to her daughter. "Tomorrow we fight to continue the legacy."

"RIP Ruth Bader Ginsburg," professional wrestler Retesh Bhalla (who wrestles under the name Sonjay Dutt) tweeted. "Here is my daughter last year at 8 years old dressed as RBG for superhero day. She read a book on RBG and chose her as her superhero."

"I cried like I had lost an actual friend," one parent tweeted of Ginsburg's passing. "My candle is lit in her honor right now and this photo of my daughter as #RBG for an old school project is making me smile."

Of course, young girls aren't the only admirers of Ginsburg as father Greg Britton proved with his photo of his older daughter dressed as the late Supreme Court justice.

"In 2016, my daughter dressed as RBG for Halloween," Britton explained.

As she's laid to rest at Arlington National Cemetery after lying in repose at the U.S. Supreme Court for two days this week, in sharing photographs of their children dressed as Ginsburg, parents across the country highlighted just how far reaching the late Supreme Court justice's legacy truly is.