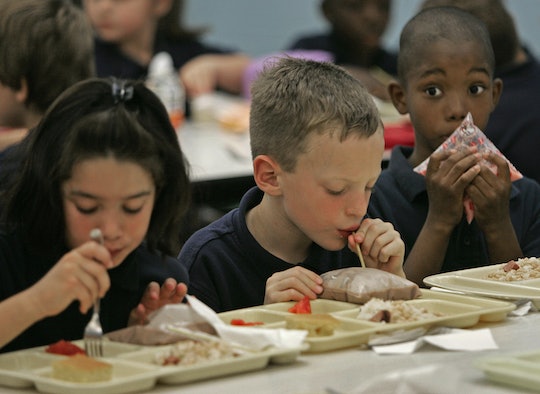 Parents Rally To Save 500,000 Kids' Access To Free School Meals

Changes the Trump administration proposed to the food stamp program earlier this year could result in nearly 500,000 children losing access to free school meals — meals that, for many children, could be the only real meal they get in a day. Frustrated, a number of concerned citizens and parents are rallying to save free school lunch access and stop the U.S. Department of Agriculture (USDA) from implementing its proposed rule.

"There's something especially egregious about taking food away from hungry kids who sometimes get their only meal at school," PaKou Her, the digital advocacy, growth, and innovation campaigner for Parents Together, a parent-created nonprofit news source that seeks to bring parents up-to-date information regarding the latest research, policies, and trends, tells Romper of the proposed changes.

First published in July, the USDA's proposed rule — entitled "Revisions of Categorical Eligibility in the Supplemental Nutrition Assistance Program (SNAP)" — seeks to eliminate the states' use of expanded categorical eligibility, effectively ending automatic enrollment in SNAP, the formal name for the food stamps program, for families who receive other means-tested welfare benefits.

Currently, 43 states allow families who've qualified for the federal government's Temporary Assistance to Needy Families Program (TANF) to automatically receive food stamp benefits like access to The National School Lunch Program and the School Breakfast Program. This is often referred to as a nominal benefits loophole, according to the USDA.

Under the Trump administration, the USDA has proposed eliminating that loophole and limiting such categorical eligibility to families who receive substantial and ongoing assistance from TANF, such as cash or non-cash benefits valued at $50 or more per month for a period of at least six months. But, according to CBS News, a USDA analysis of the proposed rule's potential effects showed that eliminating the loophole would likely result in nearly 3 million people (1 million of whom are children) losing access to food stamps.

The analysis also noted that, under the proposed rule change, families who lost their SNAP benefits would consequently have to apply for the nation's reduced or free school meal program, CBS News reported. And while 45% are expected to qualify for the program, the news outlet reported that 40,000 children could be denied. Additionally, some 497,000 children would likely only qualify for reduced-cost meals, meaning they'd have to pay 40 cents for lunch and 30 cents for breakfast — a cost families who fall just above the poverty line may not realistically be able to afford.

Initially launched on Facebook Messenger, the group says the petition has since gathered almost 1.4 million signatures. And according to Her, the petition has been signed by people from every state, from independent voters as well as Democrats and Republicans. Signers also include those who said they benefitted from food stamps and free school lunches when they were kids as well as those who reported their children currently benefitted from the programs. "We are a really diverse and powerful group of people," Her says of the petition's signers.

Parents Together plans to deliver their petition — with an ideal 1.5 million signatures — to Secretary of Agriculture Sonny Perdue on Thursday, Nov. 14. Beforehand, the nonprofit will rally outside the USDA with kids and families to discuss how and why the USDA's proposed rule is harmful to families and children.

"When you name the cognitive, developmental challenges that young people will face and do face when they don't have enough to eat is really dramatic," Her tells Romper. Feeding America notes that children who face hunger may struggle in school, experience developmental difficulties with language, as well as develop social and behavioral problems.

You can sign the petition Parents Together launched to save children's access to free school lunches here.