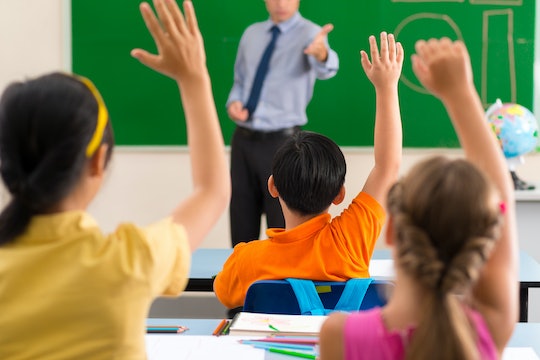 Parents Launch A Protest Of Their School Over Another Kid's Clothes

For some parents, letting their children experiment with how they present themselves to the world is no big deal. But for others, anything outside of traditional gender norms — girls wearing dresses and playing with dolls, boys engaging in sports and favoring "boy toys" like cars and trucks — is simply unacceptable, or at least outside their realm of understanding. Over on England's Isle of Wight, it seems the parents who decided to remove their kid from school over a classmate's gender expression — really, over a child's choice of clothing — fall into the latter category.

According to BBC News, parents Nigel and Sally Rowe recently pulled their 6-year-old son from his Church of England primary school after another student came to class dressed as both a boy and girl on separate occasions. The Rowes claim their son became "confused as to why a boy was now a girl" and allege the school is "failing to respect their right to bring up their children in accordance with their religious values." Lawyers for the couple, who plan to sue the school for discrimination, will reportedly argue the school is engaging in discrimination by suggesting the Rowes' Christian faith "makes them transphobic," according to The Daily Mail.

The Rowes allegedly pulled their older son from the same school two years ago in a similar conflict. (Romper has reached out to Paul Diamond, the lawyer believed to be representing the Rowes, for comment and is awaiting a response.)

Nigel Rowe told The Daily Mail he and his wife think it's wrong to encourage young children to "embrace the false promise of transgenderism." He continued:

We think there is a real danger of children being left with psychological issues. They are complex social issues, but the fact is they are too complex for a child. There are a lot of people who are very angry about what is going on in our schools, but they are too afraid of voicing their opinions. We think that somebody has to speak out before it gets out of control.

For its part, the Diocese of Portsmouth, which runs the school, said it welcomes and respects diversity in accordance with the 2010 Equality Act, a nationwide law protecting people from discrimination and harassment in the workplace and in society at large.

"Among other things, [the Equality Act] requires schools to accept the wishes of children and their families with regard to gender identity," director of education Jeff Williams said, according to BBC News. "It would be unlawful for any of our schools to do otherwise."

While the Rowes are certainly entitled to their own beliefs, the fact is their arguments fly in the face of science that supports nonbinary gender identities in children. Additionally, the Rowes have no reason to assume a child's gender identity based solely on how that child is dressed.

According to the American Academy of Pediatrics, children typically have a "stable sense of their gender identity" by age 4 and are able to label themselves accordingly. Whether parents encourage and support their child's gender identity or expression makes a huge difference in their self-esteem and overall well-being, especially since transgender and nonbinary youth are more likely to experience depression, drop out of school, and engage in substance abuse compared to their peers. In fact, recent research from the National Center for Transgender Equality and National Gay and Lesbian Task Force has reaffirmed the importance of family acceptance in helping to protect transgender and nonbinary youth from negative health outcomes.

Both the school and parents of the unnamed child engaging in gender-fluid expression deserve kudos for creating an environment conducive to exploring one's sense of self. For everyone's sake, we can only hope the Rowes see the error of their ways and allow their own kids to be exposed to other gender identities they're likely to encounter later in life.