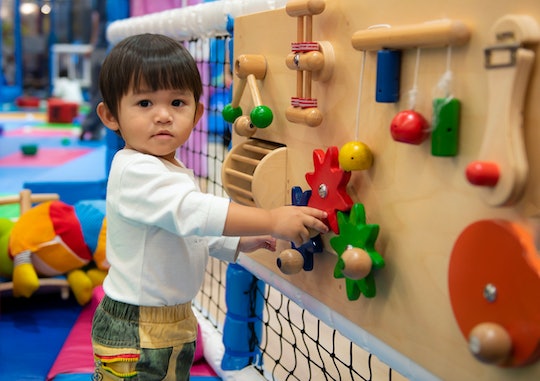 Running for public office is by no means an easy task, especially when you're a parent. But, elected officials in New Jersey are looking to make this easier for parents in the state who are running for political office. If a new bill passes, political candidates and public office holders will be able to use funds from campaign donors towards childcare.

The bill, S-698, aims to make running for office easier in the state of New Jersey while being a parent. If passed, contributions received by a candidate and candidate committee can be used towards child care — but only if the expenses are put towards the "well-being and protection of the child outside of the home" in a child care facility, or towards child care in their own homes. So, if their campaign has them spending long hours outside of the home meeting with their constituents, the politicians running can use funds raised from their campaign to pay for that baby sitter or child care facility, according to The Atlantic.

But there are some exceptions to this bill. Candidates can only use funds towards childcare if the childcare is a "direct result" from campaign activities. Furthermore, candidates can not use these expenses to pay a "member of their household" — so grandma cannot be paid to watch her grandkids. The law currently permits the use of campaign funds to be put towards campaign expenses, charitable contributions, contributing to other campaigns, paying for committee overhead and administrative costs, and paying for the normal expenses that come with running for and holding public office.

So what does this mean for parents who run and get elected for office in New Jersey? It will save them the headache for figuring out how they're going to pay for childcare when their campaign is already taking so much out of them. "For many working class New Jerseyans, especially women, running for office is simply not financially possible," state Sen. Sandra Cunningham told northjersey.com.

"This bill would ease the burden, enabling more people to pursue their dreams of running for office."

Only six different states — Minnesota, Utah, Colorado, New York, New Hampshire, and California — have put this into law, but some states allow for it to happen on a case by case basis, according to the Center for American Women and Politics at Rutgers University.

Since being passed earlier this week, the bill has been referred to the State and Local Government committee for review. If it is made into a law, it will not only help those who hold political office but could encourage more parents to run for office. That's awesome.