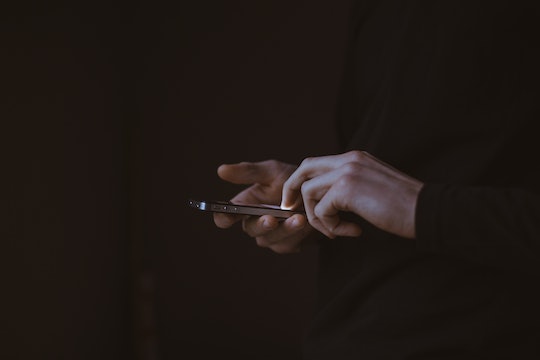 Amidst today's continued technical boom, researchers have been interested in understanding how the near-constant use of tech could be affecting kids who are growing up in the middle of it. Children today are often exposed to technology long before they even start school. While there's debate around the longterm impact of that fact, new research indicates it's not just kids' exposure to tech that could be influencing them: parents' tech use could be linked to kids' behavioral problems, too.

Researchers at the University of Michigan C.S. Mott Children's Hospital and Illinois State University decided to look at the kids and tech debate from another perspective: they examined how a parent's use of tech — like their cell phone, a tablet, or computer — influenced the kids in their study. For 170 kid-parent pairs (which included moms and dads) the researchers looked at how often a parent checked their phone or used a device during interactions with their children. The researchers wondered if these tech-based interruptions to time spent with kids (like during meals or other activities) could have an impact even if the interruption was brief. Something like checking text messages or email, or glancing at social media notifications might not take up that much time, but researchers wondered if all those little interruptions could add up to something that had a much bigger impact.

While the researchers did see a connection between how often a parent checked their phone or tech during time spent with their kids and a child's behavior, they aren't yet sure what the exact relationship between the two is. Senior author of the study, Dr. Jenny Radesky, a child behavior expert and pediatrician at Mott, pointed out that, while it may be that kids are more likely to misbehave if they feel ignored by their phone-focused parent, "It's also possible that parents of children with behavioral difficulties are more likely to withdraw or de-stress with technology during times with their child."

The study asked parents to assess how much they felt the technology in their lives influenced their interactions with their kids. Moms seemed to find their phones or other devices more problematic than dads did. About half of the parents in the study reported that their phone or device interrupted them three or more times a day. The researchers also asked parents to categorize their child's behavior over the preceding two months, specifically asking them how often their child whined, sulked, threw tantrums, or were restless or hyperactive, or became easily frustrated. Parents who reported even a few interruptions each day from their devices were more likely to report these behaviors in their children, according to the findings which appeared in the journal Child Development.

That being said, Radesky also made sure to mention that researchers realize there are a lot of things for parents to try to juggle: "It's really difficult to toggle attention between all of the important and attention-grabbing information contained in these devices, with social and emotional information from our children, and process them both effectively at the same time." The researchers admit that this idea definitely needs more research for a firm link to be established, because their study was incredibly small, but they hope it can start a conversation amongst parents about reducing the stress of tech in their (and their kids') lives. As Radesky noted in the study, "Setting boundaries can help parents keep smartphones and other mobile technology from interrupting quality time with their kids." So, even something as simple as enforcing "tech-free" time at home — for both parents and kids — may be a place to start.

More Like This
Festive Mommy & Me Holiday Nail Ideas To Try
If Your Kids Love Their Elf, You Don't *Have* To Put Him Away On Christmas
Spread Some Christmas Cheer In Your Child’s Bedroom
20 Stocking Stuffers For Kids Under $20