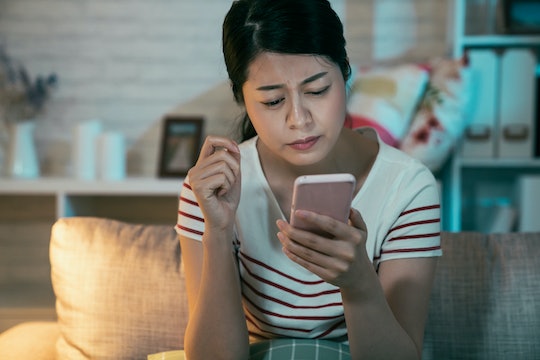 Study: Parents Text Their Kids This Question More Than 900 Times Per Year

While my children aren't old enough to have their own phones to text on just yet, plenty of kids who are a little bit older do, mainly as a way for their parents to keep in touch with them. It makes sense, considering how busy families are these days with after-school activities, side gigs, and part-time jobs. So it's not all that surprising to learn parents text their kids one question in particular a whole bunch. In fact, new research shows parents will shoot off this text more than 900 times per year.

A new study involving 2,000 parents with children between the age of 6 and 25 looked at their communication habits. The study, which was carried out by OnePoll in collaboration with Life360, found that one-on-one text messaging (an average of 28 daily messages per family) was the most popular form of communication between these parents and their children.

Unsurprisingly, families messaged each other to keep in touch for almost every aspect of their lives. The top text-related activity, however, was making dinner plans (53 percent). This was followed by coordinating errands (43 percent), coordinating pick-up and drop-off for school and extracurricular activities (46 percent), and checking in on everyone (43 percent). The poll found that American families exchange an average of 10,384 messages per year.

Other interesting, and TBH relatable, stats from the study include:

If you're like me — and still have fairly young children — these types of concerns and conversations will be coming up sooner than you might think. That's because, according to Influence Central’s 2016 Digital Trends Study, a child gets their first smartphone at 10.3 years old, on average. And by age 12, that research found half of children have a social media account.

And considering teens, between 13 to 18 years old, are spending a whopping nine hours per day on entertainment media and pre-teens, aged between 8 and 12, are spending six hours per day — outside of homework media — it makes sense that smartphones are families' main source of keeping in touch.

So brace yourselves, parents of grade-schoolers. Because before you know it, you too will be texting your kids "Where are you?" roughly 900 times per year — or, once you crunch the numbers, more than twice a day.

More Like This
These 72 Instagram Captions Are Perfect For Your Snow Day Pics
13 Is "Too Early" For Kids To Be On Social Media, Surgeon General Cautions
A Parent’s Guide To Stomach Pain In Kids
101 "Would You Rather" Questions For Kids
What Parents Are Talking About — Delivered Straight To Your Inbox