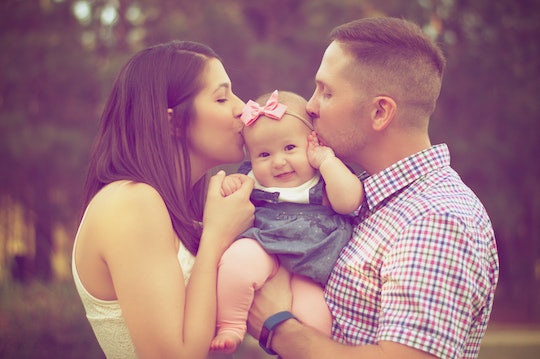 Sometimes it feels like there are never enough hours in the day, especially to spend time with your children. Between work, school, and errands, there is so much to be done and so little time to spend quality time with kids or family members, otherwise. But parents shouldn't have to worry about this, because they're doing just fine. According to a new report from the Economist, parents today are spending way more time with their kids than they used to, and that is such a relief.

While parents might feel like they're not spending enough time with their kids, especially this holiday season when the stress kicks in, they can be assured that they are. On average, according to the Economist, moms spend 104 minutes — or a little more than 1 hour and 30 minutes — with their kids and dads spend 59 minutes, or a little under an hour a day caring for their children.

These numbers are compared to 1965, when the average mother spent 54 minutes a day caring for her child and the average dad spent just 16 minutes a day. But let's be real, any amount of time a dad spends with his kid in 2017 is more than they did in 1965.

This past May, one study conducted by the University of Michigan, according to ABC News, found that parents are spending more time with their kids than they were two decades ago, which indicates a change in society. "There has been a shift in norms toward more involved fatherhood, and more involved parenting in general," lead researcher John Sandberg, a sociologist at University of Michigan's Institute for Social research, told ABC News.

More time spent with children can be attributed to other parenting trends, according to USA Today, such as "intensive parenting," which is the idea where parents believe that spending more time with their children is better for their well-being.

While the Economist's report is great news, it's important to remember that time doesn't necessarily equate to quality time. During the time spent with their children, parents should focus on what they're doing in the moment rather than applaud the fact that they're spending time with their kids in general. A 2015 study found, according to The Washington Post that, in kids between the ages of 3 to 11, the amount of time their parent spent with them had "virtually no relationship" to how they turned out.

Instead, what parents did with their kid during that time had more of an influence than the amount. In fact, that study found that mothers who were stressed while spending time with their kids did more harm than good and caused behavioral problems. Quality time matters, according to The Washington Post. Reading to kids, sharing meals, and engaging with them one-on-one has positive results. One 2007 study found that doing every day activities with kids, like household chores or running errands, according to Quartz, resulted in stronger family bonds than other planned activities. Quality time doesn't have to equate to a lot, which could be why so many parents are spending more more time with their kids than ever before.

If you feel that you're not spending enough time with your kid, then you shouldn't worry. Those little moment spent washing dishes together or watching the latest Pixar movie add up and they matter.