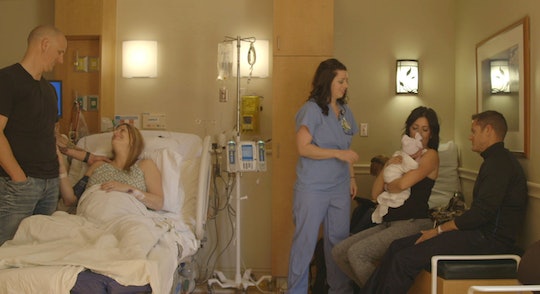 Jenni Morello via Made In Boise

Made In Boise, a new documentary from public broadcasting's ITVS and Independent Lens, takes a closer look at the ins and outs of paid surrogacy, following four women carrying children for others as they navigate pregnancy and birth with the intended parents and their own families. In an exclusive bonus clip shared with Romper, filmmakers Beth Aala and Beth Levison provide viewers with an intimate look at what life after baby's arrival looks like, shedding light on the fact that parents via surrogacy can experience postpartum depression, too.

Unable to conceive on their own, Rayner and her husband turned to Nicole, who, along with being a surrogate, is also the founder and CEO of A Host of Possibilities, an all-inclusive surrogate agency located in Boise, Idaho.

Not long after bringing her baby home, Rayner says in the clip that she found herself experiencing postpartum depression. "I definitely had postpartum depression," she said. "And then I felt guilty about it because we worked so hard to have Grayson. I'm thinking every moment is supposed to be sunshine and roses and rainbows, and it's not always like that."

Although often mistakenly thought to only impact birth mothers, perinatal mood and anxiety disorders like postpartum depression can also affect fathers and nonbiological parents, such as those who adopt or use surrogates, according to the Mayo Clinic.

As Made In Boise reveals, Rayner wasn't just facing the worries, anxiety, lifestyle changes, and sleepless nights that can come with having a new baby. The new mom also faced a myriad of emotions — and in some instances stigma — that surround surrogacy.

"I think some people feel shame around surrogacy," Rayner tells Nicole. "Maybe it's expectations that maybe family or culture has put on them, that they're not good enough or adequate."

Aala, producer and director of Made In Boise, tells Romper that "surrogacy is so emotional for the intended parents."

"What people don’t realize is once they get to the point of choosing this path they have experienced such loss for not being able to have a child on their own," Aala says. "And the focus can be so heavy on trying to have a baby it’s easy forget there are more highs and lows once the baby has arrived."

There are no federal laws on surrogacy, and, as noted by the Sensible Surrogacy Guide, a handful of states have laws prohibiting surrogacy agreements or, in the case of Louisiana, limiting them to married heterosexual couples, while some states allow commercial surrogacy. The guide classified Idaho as "friendly under some conditions" to surrogacy, noting that the state allows pre-birth surrogacy orders (awarding guardianship to the intended parents in advance of birth) as long as the intended parents use their own egg or sperm.

These surrogacy friendly laws have reportedly helped make Boise an "epicenter" of the United States' growing surrogacy movement, with one in 15 mothers projected to carry a baby for a stranger, per the filmmakers. And Made in Boise provides viewers with a personal glimpse into this booming industry.

Made in Boise will kick off PBS' new season of Independent Lens, presented by ITVS, at 10 p.m. ET on Oct. 28. You can check your local listings here and if you'd prefer to stream, you can also catch the documentary on PBS.org as well as on the PBS Video App.

More Like This
Catherine Reitman Calls It Like She Sees It: “Being A Working Mother Is Impossible”
Sarah Michelle Gellar Is Facing A Terrifying Parenting Milestone: Sleep Away Camp
Jenny Slate Played Our Parenting Edition Of Never Have I Ever & Here’s What We Learned
What Exactly Are Minions, Anyway ?