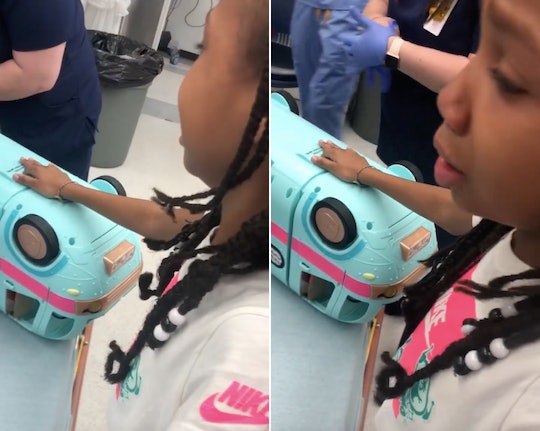 Parents Warn Kids Are Getting Their Finger Trapped In The L.O.L. Surprise! Glamper

One of this season's most popular toys may have a serious safety issue as a number of parents have reported that a push button on the L.O.L. Surprise! Glamper has trapped their children's fingers, resulting in some families having to dismantle or break the toy in order to free them. While MGA Entertainment Inc., the company behind the L.O.L. Surprise! brand, has said that the toy was "fully compliant" with safety requirements, the potential safety hazard has since prompted the company to redesign the button on the toy out of "an abundance of care."

"I am extremely upset to hear about our fans’ negative experience with the L.O.L. Surprise! Glamper," Isaac Larian, CEO and founder for MGA Entertainment, tells Romper in a statement. "Safety is a top priority when we develop our products, which must pass third-party toy testing and all applicable safety requirements before they’re shipped to retailers. I take any concerns where injury is involved very seriously."

"There is a caution sticker on the glamper, and although the product was fully compliant as originally sold, in an abundance of care we have now re-designed the button mechanism to prevent any possibility of finger capture," Larian's statement continued, adding that if customers have questions or concerns about the toy, they can contact the company's customer services team immediately.

Tiffany Peay was one of several parents who brought attention to the toy's potential safety hazard. She tells Romper that when her 9-year-old daughter went to separate the 2-in-1 L.O.L. Surprise! Glamper using a button on the bottom of the toy, her finger immediately became stuck. According to Peay, no amount of gentle tugging could free it and even attempts to lubricate the girl's finger with oil in order to slide it free were unsuccessful. When Peay saw her daughter's finger begin to swell and change color, she sought emergency medical help.

"I didn't know what else to do," Peay tells Romper, adding that her daughter was terrified. "Everything we were doing, she could feel it and was saying it was hurting so we had to disassemble the entire car."

Video Peay shared on Facebook showed her daughter tearfully begging nurses not to pull on her finger or the toy. Ultimately, Peay says a team of doctors and nurses had to take the toy completely apart piece by piece in order to free her daughter's finger, which she says remains swollen and sore.

Another parent, Jacqui Rothermel‎, reported in a post shared Thursday to the L.O.L. Surprise! brand page that firefighters had to cut her daughter's new L.O.L. Surprise! Glamper apart in order to free her trapped finger. "Now she is without her toy which is GARBAGE," Rothermel‎ wrote. "Luckily besides some superficial abrasions she is fine [and] the swelling from her finger being stuck has now subsided."

Loren Ballard also reported on the company's Facebook page that her family had a "terrible scare" that almost resulted in a trip to the emergency room. "My poor baby was so in so much pain her little finger was swollen and bruised," Ballard wrote. When initial attempts to pull the girl's finger free proved unsuccessful the family opted to unscrewed all of the toy's pieces, which finally freed the finger. "She was so happy to get this toy and now she is petrified of it. Which I don’t blame her!," Ballard wrote. "This is just completely unacceptable especially when she was playing with the toy 'as directed.'"

An assembly instructions video for the LOL Surprise! Glamper shared on the company's YouTube page directs toy users to "gently press the button on the bottom" to detach the front cabin from the back cabin of the toy, but warns users to "be careful, don't press too hard." However, a number of parents, including Peay, have reported that even gentle pushing of the button results in trapped fingers.

A number of parents posted on the L.O.L. Surprise! Facebook page to report or share photos of either their finger or their children's fingers trapped within the brand's 2-in-1 Glamper toy just after Christmas. On Twitter, one parent reported having to saw part of their daughter's L.O.L. Surprise Glamper in half after her finger became stuck in the toy's push button. "Be VERY careful with the @LOL_Surprises Glamper Van," they warned, adding the toy had a "DANGEROUSLY bad design."

While complaints about the L.O.L. Surprise! Glamper have rolled in consistently since Christmas, it seems that parents have reported potential safety issues with the toy's button ahead of the holidays as well. In September, a Facebook user by the name of Chanie Zarchi Wolf‎ reported their daughter's finger was stuck in the toy for more than an hour. Eventually, the family called an EMT who cracked open the top of the toy with pliers to free the child. "It took some time for her blood circulation to return to normal," Wolf‎ wrote in a post on the L.O.L. Surprise! Facebook page. "Quite the scare. This product should be recalled!"

Earlier this month, one parent even posted a tutorial to YouTube on how he'd managed to free his daughter's finger from the L.O.L. Surprise! Glamper after a roughly 20 minute struggle. "Hopefully this video helps you get it out without further damage or trauma," he wrote.

Editor’s Note: This article was updated to include a statement from Isaac Larian, CEO and Founder for MGA Entertainment

More Like This
13 Is "Too Early" For Kids To Be On Social Media, Surgeon General Cautions
The New Dad In Your Life Will Love These 20 Sweet Valentine's Day Gifts
This Is What New Moms Really Want This Valentine's Day
Are We All Stressed About Grocery Prices Right Now Or Is It Just Me?
What Parents Are Talking About — Delivered Straight To Your Inbox

This article was originally published on Dec. 27, 2019