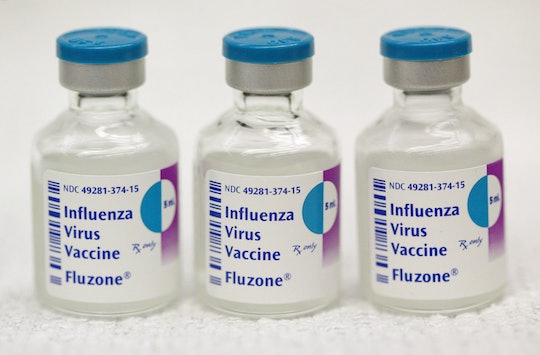 Children Of Vaccinated Parents More Likely To Have Immunizations

Despite overwhelming scientific evidence that proves vaccinations aren’t dangerous, public health experts say immunization rates among children are not as high as they should be. A recent study has shown a link between the declining rate in vaccines and parenteral immunization habits after finding that parents who routinely get vaccinated against the flu themselves are three times more likely to vaccinate their kids against the common viral infection — in addition to other diseases — as well. And the research found that reverse was true for parents who opted against getting the flu shot themselves, claiming that they were more likely to have children who weren't immunized against the flu as well as other diseases, such as human papillomavirus (HPV).

To get to these findings, researchers for the study — published this month in the journal Pediatrics — started by looking at whether parents got the flu shot and if the trickle-down effect was shown in their children’s vaccination records. And there was pattern: If parents got the flu shot, so did their kids and if parents who had been getting the flu shot stopped getting them, their kids were twice as likely not be immunized.

"Parents who chose not to immunize themselves for influenza were more likely to have children who weren't immunized against other diseases, such as HPV," the study’s lead researcher Steve Robison, from the Oregon Health Authority's Immunization Program in Portland, told HealthDay.

The HPV vaccine is important to note because it’s been proven to protect against cervical cancer in women and other less common cancers, like cancers of the anus, penis, vagina, vulva, and oropharynx (the middle part of the throat behind the mouth), according to the Centers for Disease Control and Prevention (CDC).

Additionally, if parents had not been getting the flu shot routinely and decided to get one this year, their children were over five times more likely to get a flu shot, Robison told HealthDay.

According to HealthDay, the association between parental vaccinations and the rate at which kids would get the flu shot were seen for all ages of children, including teens.

Researchers said in the study that immunizing children is an important step in stopping the spread of flu and other diseases. Simply put, when children aren't vaccinated, they put others at risk, as they can transmit vaccine preventable diseases to fellow students at schools and to people in their communities, including infants and seniors with vulnerable immune systems.

"An annual seasonal flu vaccine is the best way to reduce your risk of getting sick with seasonal flu and spreading it to others," the CDC has counseled. "When more people get vaccinated against the flu, less flu can spread through that community."

Still, flu vaccination rates in the United Sates are on the decline with only 45.6 percent of Americans, including children, getting the flu shot this past season, according to the CDC.

Despite this evidence and recommendations from public health experts, vaccine hesitancy among parents in the United States has been growing. According to HealthDay, the researchers concluded that to break this pattern, parental immunizations will have to increase.

In other words, it's up to parents to do what's best for their kids — look out for themselves sometimes, too.