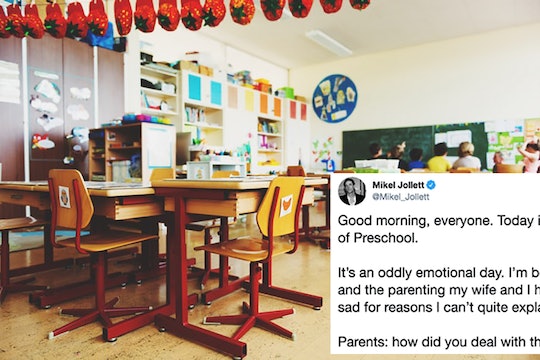 Each year of school brings so much joy, heartbreak, and a million other emotions to students. And the first day of school can perhaps be the worst day for this, as there is just so much anxiety and sadness that can be associated with this big moment. But this process can be difficult for moms and dads too, especially if it's their first kid. And for this dad's first day of school tweet proves that it's just as hard for the parents as it is for the kids.

The first day of school is not always easy, especially if it means waking up a few hours early to the sound of an alarm clock and being thrust into a brand new environment. There can be a lot of emotions for anyone heading back to school, but it's doubly true for young kids heading in to their first day of preschool or kindergarten. It's their first experience in a brand new environment without their parents, and that's a big deal.

If you think this is scary for kids, then it is just as scary for their parents. It's also enough for them to want to get some advice from others. Take Mikel Jollett, the lead singer for the band, the Airborne Toxic Event, who enlisted the help of his Twitter followers this earlier this month to help him and his wife sort out their emotions on their son's first day of pre-school.

"It's an oddly emotional day," Jollett wrote. "I'm both very proud of him and the parenting my wife and I have done and very sad for reasons I can't quite explain. Parents: How do you deal with this?"

Jollett received a bounty of replies from parents who were or had been in the same boat as him, and their replies are compelling, sad, hilarious and most of all, real.

"You will deal with it the same way you shall deal with him going to first grade, to sixth, to high school, and off to college — with pride and sadness that he keeps growing and is therefore one step closer to heading out alone into the world you've prepared him for," one Twitter user wrote.

"Go cry in your car," another Twitter user wisely advised. "Then get on with your day and look forward to picking him up and hearing all about it. Enjoy every minute of it because it flies by."

"Wait until you drop him off at college," another Twitter user warned.

So many feels. All the feels.

But these replies simply prove that what Jollett went through on his son's first day of pre-school is so normal. Apparently, it's quite common for parents to get the "back to school blues," according to TODAY. This is because it triggers a time for reflection, according to ABC News. And a recent poll found that 63 percent of parents said that they have a harder time with the first day of school, according to Healthline. It can be especially hard for parents to see their kids assert their independence and make big steps into their future, but parents must realize that their kids will all grow up eventually.

Later that same day, Jollett tweeted that his son cried when he and his wife dropped him off at school. But when they picked him up, however, he was much happier than when they left him. "Life moves forward," he added.

As Jollett noted, forward is the only way that parents and kids can go. And thankfully, the internet is filled with tips and tricks to navigate those first few days of drop off for both the parents and kids that seem to be struggling.

Although parents might be having a hard time as they send their kid off to their first day of preschool, or the first day of their senior year, they should find it comforting to know that they are far from alone.

More Like This
Tips For Apple Picking With Kids
'Squid Game' Is Coming Back For Season 2 On Netflix: Here’s What Parents Need To Know
25 Mother And Daughter Halloween Costume Ideas That Are Cute And Spooky
Now Your Kid Can Rock AFO Braces With Their Favorite Doll Or Stuffie