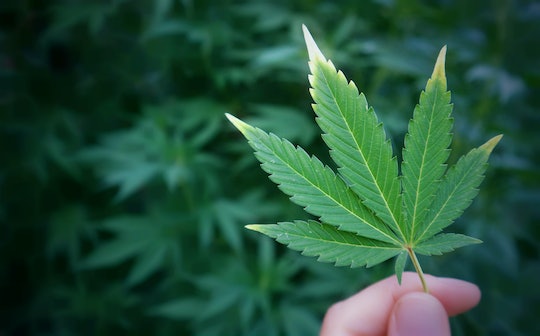 It's no secret the marijuana industry in the United States is growing. And as more states push to legalize marijuana and the stigma surrounding cannabis use gradually fades, more parents are also lighting up. Despite the recreational drug's rise, however, there hasn't been much research into how it can potentially affect a parent's approach to discipline. As it turns out, a new study has found that parents who use marijuana discipline their kids more.

The study — which was published on July 15 in the Journal of Social Work Practice in the Addictions — looked at 3,023 randomly-selected California parents with children ages 12 or younger. Participants were contacted by phone in 2009 and asked about their recent and past use of alcohol, marijuana, methamphetamine, and other drugs. Additionally, parents were asked about how often they use non-violent discipline, corporal punishment, and physical abuse.

What the study found was, on average, current marijuana users used more discipline techniques of all kinds on their children than non-users, according to Science Daily. This includes all types of punishment, including timeouts and in some instances, physical abuse. Researchers also considered a number of other factors that might have impacted parents' use of discipline, like stress, depression, and demographic information.

“The acceptability of marijuana is growing in the United States and with that, more parents feel free to use the drug, sometimes even in front of their children,” said Bridget Freisthler, co-author of the study and a professor of Social Work at The Ohio State University, in a news release. “Some parents claim it makes them a better, more relaxed parent, but that may not be the case.”

“It appears that users may be quicker than other parents to react to minor misbehavior,” Freisthler said. “We can’t tell from this study, but it may be that parents who use marijuana or alcohol don’t want their children to spoil the buzz they have, or bother them when they have a hangover.” She added:

The use of several different kinds of substances certainly is a warning sign that parents may be relying more heavily on discipline to control their children ... Marijuana use is not risk-free. It affects a lot of behaviors, including parenting.

Considering cannabis use of moms and dads rose from 11 percent in 2002 to 17 percent in 2015, this new study is both relevant and important. Because as relatively harmless as marijuana might be (at least compared to other recreational drugs), it could potentially change the way a person parents.