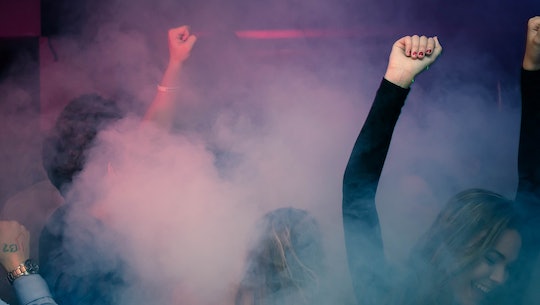 One of the most uncomfortable aspects of getting older has to be the fact that it totally sneaks up on you. One day you're in college with your entire life ahead of you and an impressive ability to shake off last night's hangover, and the next, you're actually looking forward to being in bed by 9:30 and are voluntarily making meals that include things like quinoa and kale. That switch seems to happen fast (honestly, how am I already in my 30s, and how is it possible that kids born in the mid '90s are now full-on adults?). But in a recent attempt to actually quantify that phenomenon, U.K. researchers say 37 is too old to go clubbing, and that most people start to get sick of partying at around age 31. But, to parents, that conclusion is LOL-worthy.

At first, the conclusion seems relatively reasonable, and since the study involved analyzing the habits of 5,000 British adults, according to Babble, it makes sense that those researchers thought they were on to something. But as any parent anywhere can tell you with absolute certainty, the study has failed to acknowledge one very important and inescapable fact: if you have kids, you are probably already a totally lame homebody no matter how old you are. And, more importantly, you're probably totally fine with that.

The probably-not-super-scientific study was conducted by Curry's PC World, and in a press release, Brand and Communications Director Matt Walburn said the findings are meant to "[recognize] the fact that there comes a time when we appreciate our home comforts more than a hectic social life and it can often be a drag to play the social butterfly at parties and nights out." That sounds lovely, but let's be honest, if you have kids, you probably aren't staying home in an attempt to escape your "hectic social life." You're probably staying home because babysitters are expensive, and you don't actually want to bother putting on real pants.

But even if you do manage to get out the door and successfully stay awake past midnight? The sad truth is that your kid is still going to be up at the crack of dawn ready to play and demanding breakfast — and he's definitely not going to have any sympathy for your why-did-I-think-more-wine-was-a-good-idea headache.

One of the study's findings, though, does show that there could be an unexpected upside to parenting ruining your ability to party like you did when you were 22. And that is that you get to avoid the judgement of people who are actually 22. According to the study, most people polled seemed to think that by the time you're approaching your 40s, you're definitely too old to be going out partying. And 37 percent of those polled also said that "there is nothing more tragic than seeing adults in their 40s and 50s surrounded by twenty somethings in pubs and bars." (Ouch.)

As someone who gave birth to twins at age 26, and who probably hasn't stepped inside an actual club in almost a decade, I sometimes wonder if I should have squeezed at least a few more good partying years out of my twenties before diapers and sippy cups took over my life. But then I remember how insanely good it felt when my husband and I cut our last date night short to come home early and sleep a solid, uninterrupted 10 hours straight while the kids were at grandma's, and it becomes pretty clear that that stage of my life is totally behind me. Maybe I'm lame, but I'll take pizza and binge-watching old episodes of Friends over tequila shots and questionable life choices any day.