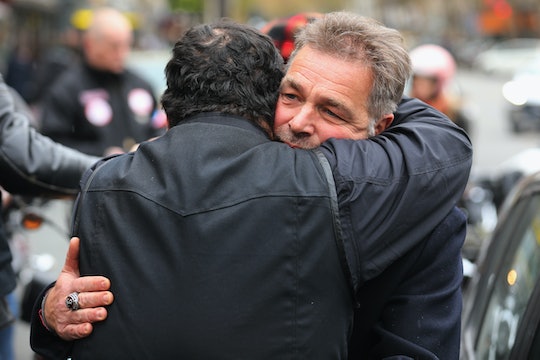 Paris Eyewitness Accounts Are Harrowing: "They Were Shooting As If We Were Birds"

Less than 24 hours six coordinated terrorist attacks rocked the city and claimed the lives of over 120 people, eyewitness accounts of what happened in Paris Friday are starting to roll in. And the accounts are, in a word, chilling. ISIS has sine claimed responsibility for the attacks and French President Francois Hollande has granted the French police special privileges to respond in the coming days. During an address to the nation Saturday, Hollande said with all certainty, Friday's attacks were “act of war.” He continued:

More Like This
These 35 Photos Of Prince William & Kate Middleton Are As Close To Royal PDA As It Gets
Josh Duggar's Family Has Spoken Out As He Faces Child Pornography Charges
Every Adorable Photo Of Prince Louis
Moms To Toddlers Everywhere: This Aggression Will Not Stand, Man

It is an act of war prepared and planned outside, with complicity from within the country. It is an act of absolute barbarism. France will be ruthless in its response.

Hollande has declared a state of emergency for the nation. Part of that response is giving French police the ability to declare curfews in certain areas and close neighborhoods off. Interior Minister Bernard Cazeneuve said on television that under the national state of emergency, French police would also be able to arrest anyone who is a threat to police activities. According to Agence Free Presse, France has also banned all public demonstrations until Thursday. The French army has also deployed 1,000 troops to the streets of the city. The Eiffel Tower is also closed indefinitely.

French police have already found a Syrian passport on one of the attackers bodies. Seven attackers died in the assault. One attacker has been identified as a French citizen.

Today, eyewitness reports began to circulate about the attacks as people on the streets of Paris shared the unspeakable violence they witnessed before their eyes.

One eyewitness, Franck Benarroch, a 26-year-old sales who lives close to Le Bataclan, told the Huffington Post that at the stadium it was all very calm until the end of the game when an announcer came on and said there had been an “incident” nearby. TK said that “there were helicopters and police telling us to leave the stadium now. People were still in the stadium on the field and some of my friends were still on the field.”

He continued that “As soon as we got out of the stadium hundreds of people started to run and we were f*cking scared.”

Other survivors were stuck in a bar for about six hours.

The stories from the Bataclan concert hall are harrowing. According to Vox, the French paper La Figaro has a firsthand account from the concert. A man told the paper that:

I saw the singer take off his guitar, I turned around, and I saw a guy armed with an automatic weapon who was firing in the air. Everyone lay down on the ground. From there, instinct took over, with every round we tried to crawl as far as we could from the shooters.

These other stories from people in Paris are just terrifying. NPR has compiled the stories like this one, from Charlotte Brehaut who was eating at Le Petit Cambodge:

I was eating with a friend of mine, we were just having our dinner ... and then all of a sudden there was really loud gunshots and bullets coming through the windows. So all the diners quickly fell to the floor and we were lying on the floor while numerous gunshots were fired and there were shards of glass coming through the windows. I saw a woman lying next to me — I was holding on to her, actually — and I said, are you OK, are you OK? ... When I lifted my head, I could see ... she was fatally wounded.

And this from Marc Coupris, one of the hostages inside the Bataclan:

Everyone scrabbled to the ground. I was on the ground with a man on top of me and another one beside me up against a wall. ... I don't know how long we stayed like that, it seemed like an eternity.

Other footage has emerged from the streets of Paris, like this video of bodies being dragged out of the concert venue and people fleeing for their lives. Others are telling news outlets about running and "being shot at like birds."

Meanwhile, the band U2 cancelled their concert in Paris for this weekend, but the French-English friendly soccer game is scheduled.