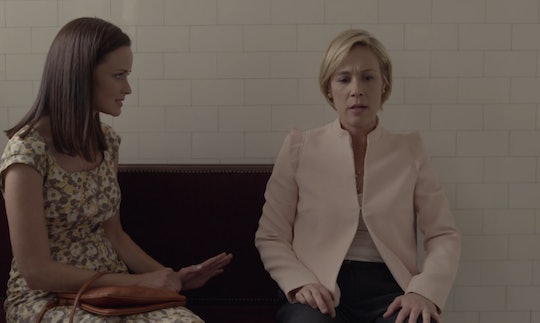 Paris Geller Is The Badass, DGAF Mom I Aspire To Be

When you're expecting your first child, you tend to look at popular culture for examples of how you'd like to parent. I always envisioned my parenting style to be similar to my regular personality: I'd be a tough, ball-busting, hyper-cynical, foul-mouthed mom who'd drag her (perfectly well-behaved) kid to high-powered breakfast meetings at Le Pain Quotidien. Above all else, I envisioned myself as a working mom, someone who would never sacrifice her professional ambitions for her desire to care for her kids, who would always carve out space for herself in the midst of feedings and diaper changes and repeat Caillou viewings.

Yet during my seven-and-half months of pregnancy, I've been struck by how few pop-culture moms there are who fit into this category, who manage to carve out space for their own professional lives while simultaneously caring for their kids. All the tough, foul-mouthed, no-nonsense moms I admired — Carmela Soprano, Colleen Donaghy, Lois from Malcolm in the Middle (all of whom appear on this list of worst TV moms, if that says anything about me) – were housewives, retired housewives, or part-time workers whose careers were totally secondary to their husbands. Their kids were their lives, and their lives were their kids — and while I personally saw nothing wrong with that, it did not fit into my own conception of myself as a future parent.

Even in 2016, it's rare to see a mother on TV who devotes herself to her family while simultaneously carving out the space to have a life of her own. Which is why I was so happy to meet Paris Geller, my new favorite working mom, in Gilmore Girls: A Year In The Life.

As someone who did not grow up watching Gilmore Girls, I watched the Netflix revival for the same reason everyone watched the Pacquaio/Mayweather fight in 2015, or why we all inexplicably wore chokers last summer: it's just something you do. I knew nothing about Paris Geller, Rory Gilmore's blunt, aggressive, hyper-driven best friend and roommate at Yale University.

She's a fairy godmother for women of my generation, who are increasingly delaying getting married and having kids in favor of focusing on their careers: in a world that still forces women to choose between domesticity and professional fulfillment, Paris waves her magic wand over women's biological clocks and gives them the chance to truly Have It All.

Yet the second I was introduced to the grown-up version of Paris in the first episode of Gilmore Girls: A Year In The Life, I was smitten. When we meet her 10 years after the original series finale, Paris runs a fertility agency that is so successful she touts Neil Patrick Harris as a client. She's laser-focused on her career, unironically quoting Stalin during business lectures for high-schoolers and referring to herself as "the Pablo Escobar of the fertility world."

With her slicked-back hair, spiky heels, and meticulously tailored pantsuits, Paris at first glance looks like the stereotype of the cold-hearted, sexless, high-powered single career woman, in the same model as Sigourney Weaver from Working Girl or Miranda from Sex and the City. Yet Paris has a domestic life (albeit an unstable one) of her own: she has two kids who she adores (even if she says they prefer the nanny to her), and is in the process of separating from her (frankly, pretty lame-seeming) husband. Far from embodying the stereotype of a working woman who downs martinis and sneers at other women's dreams of having babies, she's built her career around giving women who can't conceive a chance to have kids of their own.

In a sense, she's a fairy godmother for women of my generation, who are increasingly delaying getting married and having kids in favor of focusing on their careers: in a world that still forces women to choose between domesticity and professional fulfillment, Paris waves her magic wand over women's biological clocks and gives them the chance to truly Have It All.

When I found out I was pregnant last summer, the question of whether or not it was possible for me to Have It All was very much on the forefront of my mind. I was 27, and in my few short years in my hyper-competitive field I had managed to wrangle a steady, decent-paying job; I worked at least 14 hours a day and relished every minute of it. While I'd always imagined I'd have kids at some point, ostensibly when my career was more established and I'd achieved my Paris-level aspirations of conquering the editorial world, I wasn't sure how a baby would fit into that plan in my late 20s. After more than a few late-night talks with my then-fiancee, I decided to continue the pregnancy, reassuring myself that it was 2016 and if anyone could Have It All, it was me.

That notion was thrown dramatically into question about a month later, when I was laid off shortly after revealing my pregnancy. I spent months feeling completely unmoored, like a balloon floating around in the air with its string cut off; I'd spent so long thinking of my career as the be-all and end-all of my identity that when it was thrown into question, I felt I had nothing to tether myself to the ground. And because this had happened so soon after I had publicly revealed my pregnancy, it was hard for me not to think that maybe the pop-culture moms of the world were right, that I had to be either a Carmela Soprano or a Miranda Hobbes, that it was impossible for me to Have It All without being punished in some way, or having to choose between one and the other.

I stopped thinking of myself as Ej the Working Woman, who wore severe top-knots and impractical wedge boots to the office and ate Luna bars for lunch so she wouldn't have to leave her desk and sent harshly worded, all-caps emails to writers at 3 a.m. I started thinking of myself as Ej the Soon-to-be Mom, who woke up at 10 a.m. and made meatballs for her husband and wore sweatpants and went for long walks in the park because she didn't know what the hell else to do with her time other than wait for her kid to pop out.

Now that I am gainfully employed in a job I adore and happily anticipating the arrival of my first child, I no longer quite feel so torn between the two poles. That said, the fact that there are so few Parises on television — so few women who actively balance high-powered careers with thriving domestic lives — is still very much a source of concern to me.

Gilmore Girls focuses far more on Rory's lack of professional ambition (I mean, literally WHO falls asleep during an interview?!?!), than on Paris's tenacity and her ability to perform the complicated working mom balancing act.

What we need is more Parises. We need more ballsy, take-no-prisoners b*tches who get what they want because they ask for it, who pursue their dreams of domesticity and corporate domination with equal aplomb, because it's 2016 and women don't have to choose between being Carmela and Miranda, goddammit.

In those few moments where we do see Paris, it often feels as if she's portrayed as a basket case — a woman who is totally unmoored by the sight of her high school crush, who carries around an empty briefcase at a high school reunion — than as a competent mom and businesswoman. These moments are played for laughs, because isn't it funny to see a bossy b*tch character get taken down a peg? But as we all saw, in horrifying slow-motion, during the most recent election, there are real consequences to this type of sexist shaming.

Working women, particularly moms-to-be, know plenty of characters like Rory, whose charm seems to lie in her big wet eyes and her professional incompetence and her inability to make well-reasoned romantic choices. So what we need is more Parises. We need more ballsy, take-no-prisoners b*tches who get what they want because they ask for it, who pursue their dreams of domesticity and corporate domination with equal aplomb, because it's 2016 and women don't have to choose between being Carmela and Miranda, goddammit.

The question of whether working moms like myself can truly Have It All is still very much an open one. But for Paris, it isn't a question; it is a truth that she takes for granted. And when I give birth in February and go back to work shortly thereafter, I can only hope that I will feel similarly.