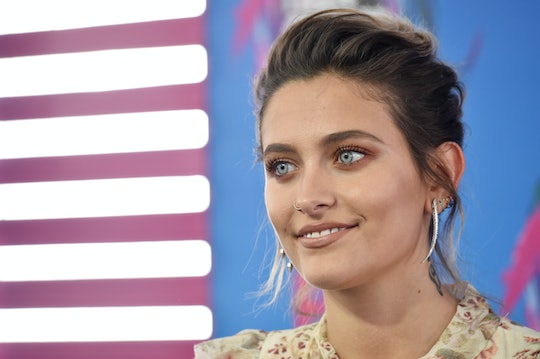 Paris Jackson's VMAs Comments About Charlottesville Were So On-Point

The 2017 MTV Video Music Awards started with a bang on Sunday night, thanks to the first presenter of the evening, and I don't mean host Katy Perry's space-themed opening skit. Paris Jackson's Charlottesville comments at the VMAs were blunt, passionate, and just what America needed to hear before temporarily shutting down their brains and watching a bunch of celebrities show off their weird new outfits. Jackson was born with a built-in audience, and by using her platform to speak up about important matters, she showed that she takes that responsibility seriously. Here are her full remarks:

I'm seeing a lot of love and light here tonight already. A lot of diversity and a lot of potential power. You know, if we were to all put our voices together, do you realize the difference we would make? If we were to all stand up united as one, our impact? It would be yuge. Believe me. Yuge! And that's not fake news. So let's leave here tonight remembering that we must show these Nazi, white supremacist jerks in Charlottesville and all over the country that as a nation with "Liberty" as our slogan, we have zero tolerance for their violence, their hatred, and their discrimination! We must resist.

Now the awkward conclusion: how does one segue from a speech like that into presenting a trophy shaped like Buzz Aldrin? By full-on embracing that awkwardness.

After the briefest of pauses, Jackson continued. "And now," she chuckled, "the, uh, nominees for Best Pop Video!" The last three words were punctuated by comical fist-pumps.

Yes, it's weird to talk about fighting Nazis and then abruptly switch to honoring the singer with the best choreography of the year. But so what? It's the VMAs; of course they're still giving out those A's. That doesn't mean that music videos are the only thing young people should care about.

Jackson's comments were a testament to the legacy of her father, Michael, just two days shy of what would have been his 59th birthday. Throughout his career, his art carried the same sentiments his daughter shared on Sunday. "Heal the World" encouraged love and unity, "Black or White" was the anti-racism anthem of a generation, and just in case anyone didn't get the message when he literally smashed the KKK in that video, he teamed up with Spike Lee to make then even more direct "They Don't Care About Us" a few years later.

Seeing his daughter carry on the family tradition at the VMAs was so meaningful for his fans, and it's honestly what all of America needed to hear.