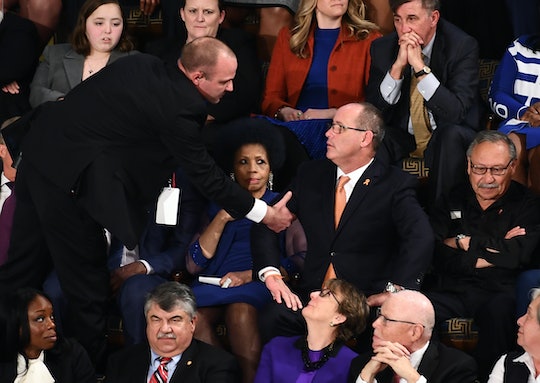 The father of a teenage girl killed in the 2018 mass shooting at Marjory Stoneman Douglas High School in Parkland, Florida, spoke out during President Donald Trump's annual State of the Union (SOTU) address Tuesday after the POTUS claimed the Second Amendment was "under siege." While the Parkland dad was ultimately removed from Trump's SOTU by Capitol security, his vocal protest has renewed national debate about gun violence and gun safety.

More Like This
The Obamas’ New Family Rule? Get Vaccinated If You Want To Hang Out With Us
Biden Proposes Plan To Give Every Child Free “High-Quality” Preschool
A Private School In Miami Says It Won't Employ Vaccinated Teachers
Queen Elizabeth Has Given Her Royal Approval For A New Line Of Beer

In the nearly two years that have passed since his 14-year-old daughter Jaime was killed, Fred Guttenberg has become an outspoken advocate for gun violence prevention. He was invited to Trump's SOTU address by House Speaker Nancy Pelosi. While guests at the SOTU normally sit quietly in the galley, Guttenberg reportedly found himself becoming increasingly frustrated and angry as the president discussed what he called "dangerous criminal aliens" and implied the Second Amendment was under attack.

"Just as we believe in the First Amendment, we also believe in another constitutional right that is under siege all across our country," Trump said Tuesday. "So long as I am president, I will always protect your Second Amendment right to keep and bear arms."

That's reportedly when Guttenberg shouted out at the president. Although applause from Republicans drowned out nearly all of what Guttenberg shouted, a HuffPost reporter said the final bit included, "victims of gun violence like my daughter."

Guttenberg's daughter was killed when a former student turned an AR-15 semi-automatic style rifle he'd been able to legally purchase on students, staff, and teachers at Marjory Stoneman Douglas High School in February 2018. A total of 17 people were killed.

On Twitter, Guttenberg apologized for the disruption he caused, noting that his emotions had got the best of him. "Tonight was a rough night," he wrote. "I disrupted the State Of The Union and was detained because I let my emotions get the best of me. I simply want to be able to deal with the reality of gun violence and not have to listen to the lies about the [Second Amendment] as happened tonight."

Guttenberg went on to write that while he was thankful to those supporting him in his fight for gun safety, he said he knew he shouldn't have interrupted the president's speech. "That said, I should not have yelled out," Guttenberg wrote in a follow-up tweet. "I am thankful for the overwhelming support that I am receiving. However, I do owe my family and friends an apology. I have tried to conduct myself with dignity throughout this process and I will do better as I pursue gun safety."

While Capitol Police handcuffed and detained Guttenberg following his outburst, the Parkland dad was ultimately released after two hours, according to The Washington Post. And although apologetic for the disruption, Guttenberg told the newspaper there was one bright spot: "I'm glad today people are talking about gun violence."