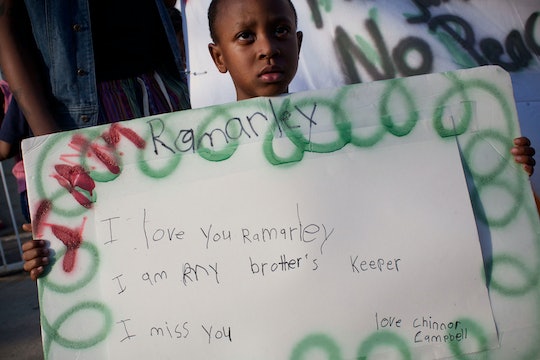 If You Want To Protest Gun Violence, You Need To Care About More Than Just White Kids

While the February 14 school shooting in Parkland, Florida, seemed somehow predictable, or inevitable, the calls to action on gun regulation, led by the teenagers of Parkland, have been a heartening surprise. The teens behind the March For Our Lives have been very effective at moving the conversation back into the spotlight. As the New Yorker wrote the day after the shooting, "the very people being thought of and prayed for were righteously determined to force the story of their classmates’ massacre into a dialogue about gun violence." They had been given a solid education that prepared them for their moment in the national spotlight, Troy Patterson wrote. But there is another piece to it. The current traction of the gun-control issue reinforces the fact that the stories that garner national attention and calls for change are those filled with the loss of young, promising life and not the lives of those who had nothing to live for in the first place. Crudely put, there is white privilege in how our children's deaths are received.

Gun violence occurs everywhere and affects people of all socioeconomic backgrounds, but the incidents that get the most media attention tend to happen in majority white suburbs. What is different about Parkland is the praise of students' efforts, in comparison to the way black activism is often covered and criticized. Gun violence has long plagued black communities and is not an apples to apples comparison to mass shootings, but the efforts of black activists to rally for change have long been ignored by the media.

And in many cases, that work has fallen to mothers. Women like Sabrina Fulton, founder of Circle of Mothers and mother of Travyon Martin, and Constance Malcolm, bereaved mother of teenager Ramarley Graham, who was shot by police in his own home. Their efforts have often been met with resistance and attempts to silence or marginalize their voices.

Following the shooting of Michael Brown by officer Darren Wilson, #Ferguson became the most tweeted hashtag in Twitter's history, alongside #BLM, but 55.2 percent of those surveyed by PEW had "little to no" knowledge of Black Lives Matter movement and its goals, as a researcher at DePaul University found. "#BLM was tweeted at an 8:1 ratio to #ALM and #BlueLM, raising the question of whether traditional media echoed this pattern," Meredith Bennett-Swanson wrote in her paper. Key voices for black Americans have faced similar treatment throughout recent decades. As leader of his National Action Network, Rev. Al Sharpton is arguably one of the most powerful figures for African-Americans, but media coverage has long painted him as someone profiting off the civil rights discourse, as Obama's "communist mentor," or as a racial agitator. And of course it can be hard to document the voices that were simply ignored.

Those who face gun violence on a level that we have only just glimpsed from our gated communities have never had their voices heard.

An August FBI report obtained by Foreign Policy Magazine showed that Black Lives Matter activists had been deemed a "domestic terrorist threat" and marked for monitoring for their stance against police brutality. Meanwhile, actual Nazis have walked the streets under police protection. There is a dangerous underpinning of racism at work.

And the Parkland students know it. A student of Marjory Stoneman Douglas High School, David Hogg, said in a Twitter Q&A that "We have to use our white privilege now to make sure that all of the people that have died as a result of [gun violence] and haven’t been covered the same can now be heard." Student leader Emma González made a similar point when she tweeted that "Those who face gun violence on a level that we have only just glimpsed from our gated communities have never had their voices heard."

And calls for students to abandon the March 14 walk-out demonstrated an even deeper racial truth: that we give the benefit of the doubt to white male offenders where we do not think twice about incarcerating the black and brown accused.

"Instead of walking out of school on March 14, encourage students to walk up," wrote Kelly Guest, in a Facebook post that was shared thousands of times. She explained her initiative to "walk up to the kid who causes disturbances in class and ask how he is doing," among other acts of kindness proposed in opposition to "casting stones." But the attempt to silence teen activists ahead of March 14 recalls a pattern of treatment communities of color receive following injustice in their towns.

When a white teen allegedly kills 17 students and teachers, we hear calls to reach out to the loner in the cafeteria; to simply be kinder to the difficult kid.

In 2011, mass protests brewed after the police shooting of the unarmed teenager Michael Brown. The police response to peaceful protest was mass arrests, with military tanks and riot gear brought onto the streets of Ferguson, Missouri, tear gas and rubber bullets fired into crowds, and 307 protestors arrested over the course of 18 days. This in reaction to the shooting of an unarmed black teen in broad daylight. And yet, when a white teen allegedly kills 17 students and teachers, we hear calls to reach out to the loner in the cafeteria; to simply be kinder to the difficult kid.

There is the notion that mass shooters are infamously white, enraged and toxic, many being domestic violence offenders with troubled and isolating personalities. Still, when students across the nation decided to Walk Out in a bold statement against gun violence, those who signal-boosted #WalkUPNotOut — a call to carry out an act of kindness to the loner child who needs help finding a way — were essentially making a plea to give these violent offenders the benefit of the doubt. As if friendship is the salve for toxic masculinity, privilege and/or untreated mental illness.

In a world actively addressing white male culture from Hollywood to school shootings, we are still struggling to level the playing field for women and ethnic minorities, and — even when it comes to school shootings — we are still making excuses for white men. We are noting their troubled backgrounds — which should be acknowledged — and externalizing blame for their crimes, but we do not offer the same perspective to black or Hispanic men or apply this thinking to inner-city violence. To men who are often products of their environments, plagued by their own troubled pasts and complicated family structures, born of drug addiction and living with untreated mental illness. To black men who use drugs at similar rates to white men, but are incarcerated at six times the rate, per the NAACP.

As the mother of black children, actively discussing and raising awareness of inner biases and privileges — my own being examined — is a first step in discussing challenging racial conversations we’ve been actively avoiding or dismissing for decades.

Like many issues in this country, our ability to examine how we view each other from a racial lens is important to note. A recent New York Times article, for example, published the findings of a Stanford, Harvard and Census Bureau study that found that black wealthy boys will under-earn wealthy white boys from similar backgrounds.

As the reporters concluded, "If this inequality can’t be explained by individual or household traits, much of what matters probably lies outside the home ... in a society that views black boys differently from white boys, and even from black girls."

"One of the most popular liberal post-racial ideas is the idea that the fundamental problem is class and not race, and clearly this study explodes that idea,” Ibram Kendi, a professor and director of the Antiracist Research and Policy Center at American University, told the Times.

The notion that people of color have been silenced throughout history when we try to call attention to inequality and injustice has not gone unnoticed. While black activists have long-rallied for gun control, Parkland students have been met with celebrity and political applause, with legislation enacted to mark change. We know that change won't happen on its own, and kudos to the Parkland shooters for enacting change. But we have to think about and acknowledge the black activists, too, who have long been on the front lines.

As the mother of black children, actively discussing and raising awareness of inner biases and privileges — my own being examined — is a first step in pushing forward the challenging racial conversations we’ve been actively avoiding or dismissing for decades. Data-driven conversations bring awareness, policy brings change, and earnest, uncomfortable conversations can bring empathy to the boys and men who also deserve it but have all along never gotten it.