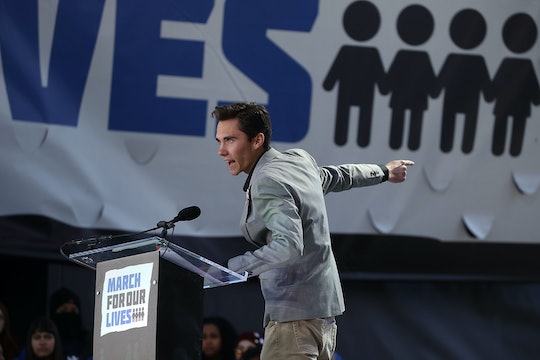 Weeks after horrific mass shootings in Dayton, Ohio and El Paso, Texas left more than 30 people dead in less than 24 hours, the survivors and student activists from Marjory Stoneman Douglas High School massacre have taken a proactive stand against gun violence. On Wednesday, the Parkland students that created March for Our Lives unveiled a plan to end gun violence, which the group says could potentially save hundreds of thousands of lives. What's more, 2020 presidential hopeful Beto O’Rourke has already publicly endorsed it.

"Gun violence is destroying our generation," March for Our Lives, the group of student activists that gathered together following the Parkland shooting to form a movement, wrote of their gun violence prevention plan. "This is simply unacceptable. That’s why, as survivors and students of March For Our Lives, we believe it’s time for a Peace Plan for a Safer America."

And on Aug. 21, the youth activists unveiled their proposal, which is thorough, detailed, and ambitious, though it will certainly face criticism and opposition from gun lobby groups. Immediately, though, it's surely sparked a conversation highlighting the urgent need for comprehensive gun violence prevention measures, as NPR reported that there's concern that President Donald Trump "lost interest in the matter."

But these young activists and other gun violence advocates certainly have not. The Peace Plan for a Safer America is comprised of six comprehensive points, as NBC News reported. As detailed on the March for Our Lives website, those points are as follows:

The proposal has already gotten O’Rourke's support. On Wednesday, the presidential hopeful wrote on Twitter, "Following the lead of the students marching for their lives, and for all of ours, we will end this epidemic. I support their Peace Plan For A Safer America — and I call on everyone else in this race to do the same."

In an interview with CNN's Anderson Cooper to discuss the plan, David Hogg — a Parkland shooting survivor, gun safety activist, and one of the founders of March for Our Lives — explained why comprehensive action is so important and actually needs to be acted on. It's been almost a month since the mass shootings in Dayton and El Paso, and Trump has yet to discuss his plan of action to curb such senseless acts of violence.

So far in 2019, there have been more than 250 mass shootings in the United States, according to the nonprofit Gun Violence Archive, so it's clear that sweeping changes are needed to change these startling statistics.