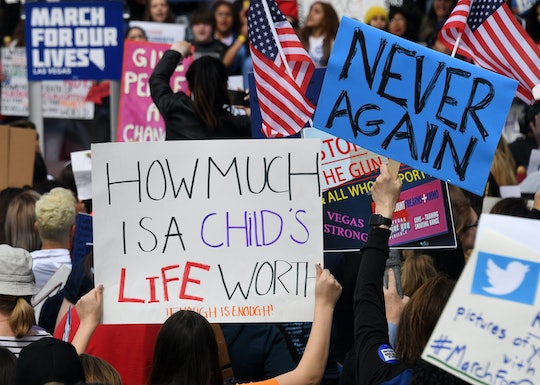 On Feb. 14, 2018, the students of Marjory Stoneman Douglas High School in Parkland, Florida were changed forever. On Valentine's Day last year, a gunman opened fire, killing 17 people at the school. And more than a year later, the effects from the tragedy are still present. Over the last week or so, it was reported that two of the survivors took their own lives, according to NBC News. But these people are not alone — Parkland survivors are speaking out about trauma on Twitter, showing that everyone is fighting their own battle.

This comes on the heels of the suicide of a former student, 19-year-old Sydney Aiello, who was also a survivor of the shooting and died of suicide last week, according to People.

There is so much to be said about these things, but the survivors of the shooting have said it best — there is no easy way for survivors to "get over" witnessing a school shooting. The grief and trauma stays with you for a very long time.

"You don't get over something that should have never happened because those that die from gun violence are stolen from us, not naturally lost," former Stoneman Douglas student and March For Our Lives co-founder, David Hogg, tweeted on Sunday. "Trauma and loss just don't go away, you have to learn to live with it through getting support."

A major life event like a school shooting has a huge impact on people — the trauma doesn't just go away when the rest of the world has to move on. Aiello's mother, Cara Aiello, told CBS Miami that her daughter suffered from "survivor's guilt" and developed post-traumatic stress disorder after the shooting. After graduating from Stoneman Douglas in 2018, her daughter failed to show up to college classes because she was afraid of being in a classroom.

This, combined with the comments from the students at Stoneman Douglas show that healing is a process. In spite of people continuing with their everyday lives, it's impossible for anyone to know when someone is ready to move on.

Survivor's guilt can happen to anyone who has witnessed a tragedy — from the victims of hurricanes, to war veterans, to those who witnessed a school shooting, according to the Baylor College of Medicine.

People with survivor's guilt tend to spend time ruminating on the event, have difficulty sleeping, and can experience feelings of hopelessness.

"Survivor's guilt can happen after a person experiences a trauma in which they wish they could have done something different to prevent another person from damage — whether it's emotional, mental, or physical," said Dr. Asim Shah, Baylor College of Medicine psychiatrist.

But there are ways of coping with survivor's guilt — and the first step is to talk with someone about it. No one is ever alone in their grief when it comes to a major life event like this. Healing takes time, and survivors should take as much time as they need to.