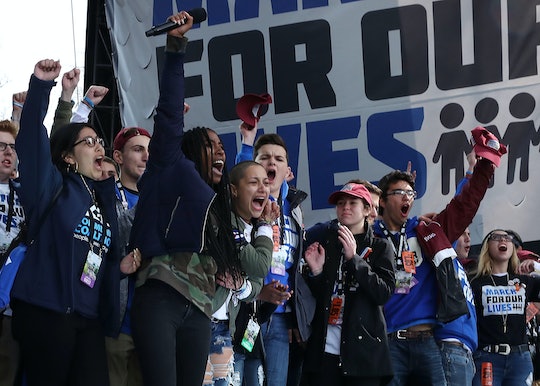 Parkland Teens Are Back At School, & The Rules Are Very Different

The Feb. 14 mass shooting at Marjory Stoneman Douglas High School in Parkland, Florida, left 17 people dead, and reignited the heated debate over gun-safety legislation. The strongest voices pushing for change were the students themselves, and on March 24, people across the country gathered for the student-led March For Our Lives protest to advocate for common-sense gun laws. Now, the Parkland teens are back at school for the first time following the demonstration, and, despite their attempts to make their voices heard, the solutions that have actually been implemented at their school have mostly just left many students feeling angry and afraid.

There's no question that the student-led March For Our Lives protest was a success: not only is the fact that the young shooting survivors were both willing and able to organize the effort in such a short period of time totally brave and remarkable, but according to CNN, the March For Our Lives demonstration was one of "the largest youth-led protests in U.S. history," with around 2 million participants, including those who attended events on the days before and after the march. Despite that impressive feat, the key ask of the march — better gun-safety legislation — has yet to be passed. The only real changes the Parkland students saw when they returned to class Monday after spring break? Heightened school security, restricted points of entry, clear backpacks, and a rule that meant they'd have to wear visible school IDs at all times.

It's not exactly hard to understand why these rules would have been implemented — school administrators had to do something to let students and their families know that they're taking the issue of school safety seriously. But in an interview with CNN, a group of Marjory Stoneman Douglas (MSD) students said they don't actually feel any safer as a result of these measures, and that the new rules ignore everything they've actually been asking for.

For one, MSD senior Isabelle Robinson told CNN that, for many students, the changes aren't exactly positive. She said,

Going to school is really so hard, and now it's going to be so much worse. A lot of the people I've talked to are dreading going back ... It feels like jail, being checked every time we go to school.

On Twitter, one student wrote, "When I get my clear backpack on Monday, I'm going to write 'WE NEED REAL CHANGE' on it." Another MSD student, Hannah, wrote on Twitter that "Policing schools is harmful to all students and their education but especially to POC, like myself. It forces students of color to be fearful of profiling and police brutality in school, as if we weren’t profiled & brutalized enough outside of school."

MSD junior Kai Koerber agreed, and told CNN that it's even more unsettling for students of color:

Every day, students lose more and more freedoms at MSD. Students of color have become targets and white students have become suspects. We do not welcome the militarization of MSD. It is terrible to see our school lose control over the protection of their students and their families.

Others, like MSD senior David Hogg, have argued that the new rule mandating the use of clear, plastic backpacks by all students is an infringement upon students rights, and not something that's even likely to make much of a difference. In an interview with Axios, Hogg spoke about the backpacks, and said that the rule was indirectly punishing the students themselves:

One of the other important things to realize is many students want their privacy. There are many, for example, females in our school that when they go through their menstrual cycle, they don’t want people to see their tampons and stuff. It’s unnecessary, it’s embarrassing for a lot of the students and it makes them feel isolated.

Many Twitter users took issue though with the fact that Hogg also said that the clear backpack requirement was an example of students "having essentially their First Amendment rights infringed upon because they can't freely wear whatever backpack they want." Hogg and his fellow student activists have, of course, been widely criticized for what some feel is their desire to infringe upon the Second Amendment rights of gun owners, and it wasn't long before Twitter users jumped at the chance to point out what they saw as Hogg's clear hypocrisy:

The point they seem to have missed though is that abolishing the Second Amendment isn't something the students are actually advocating. In fact, Hogg himself told Fox News that he's only pushing for "common sense gun reform and mental illness reform" that would make it more difficult for certain individuals to purchase guns, and he also said, he felt "Americans should have the right to own weapons," according to BBC News, but emphasized, “We have a right to live just as we have a right to bear arms."

Constitutional rights aside though, the new rules being implemented at Marjory Stoneman Douglas mostly seem to reinforce the idea that, yet again, the students' voices are the ones being ignored. The same young people who pulled off a massive national protest in five weeks — literally after they'd all survived a mass shooting at their school — are not only still fighting to have lawmakers take their concerns about gun legislation seriously, after all, but now it seems they didn't even get a say in the policies being enforced at their high school that are meant to help them feel safe.

It's not clear whether administrators plan on taking students' viewpoints into account (school officials did not immediately respond to Romper's request for comment, though Principal Ty Thompson did write in a memo to parents Friday that the policies will likely be adjusted in the coming weeks, according to The South Florida Sun-Sentinel), but the fact that so many students feel unhappy with the new rules highlights a frustrating reality. The Parkland teens never asked to be put in a position where they had to push for gun-safety laws literally for their own safety, after all, but they did it anyway. And not only are they still waiting to see those changes, many of them are now saying it feels like they are being punished — and ultimately, that they still feel afraid.

To be fair, there almost certainly wasn't anything the school district could have done to institute a policy that would leave every student feeling completely happy and safe in a school that experienced a mass shooting so recently. But from the very beginning, MSD students been asking to be heard, and to have their experience validated and taken seriously. So while the temporary safety measures might be a decent first step, it seems like it might also be way past time to let the students themselves have a chance to influence the decisions that directly affect them on a daily basis, if their safety is truly going to be a priority.

More Like This
13 Is "Too Early" For Kids To Be On Social Media, Surgeon General Cautions
Barbie Honors Aviator “Queen” Bessie Coleman In Their Inspiring Women Line
Trans Youth Describe The Importance (& Joy) Of Family Support In Moving New Documentary
Michigan Right-Wing Group Wants To Erase LGBTQ+ Sex Ed
What Parents Are Talking About — Delivered Straight To Your Inbox