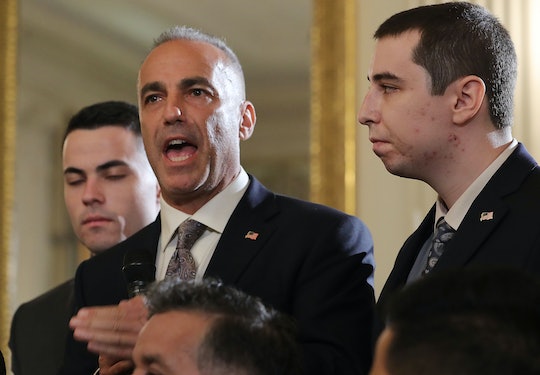 Last week, a gunman opened fire on Marjory Stoneman Douglas High School in Parkland, Florida, and killed 17 students and teachers with a semi-automatic rifle. In light of the tragedy, many are rallying behind the students who survived the attack — a group of which are planning the upcoming March For Our Lives, which will demand stronger gun safety regulations from the U.S. government. But because trying to convince Republican lawmakers that passing stricter gun safety regulations will prevent future mass shootings has not been very successful in the recent past, one father of a student who was tragically killed in the Parkland school shooting last week is addressing President Donald Trump directly. While speaking to the POTUS for nearly four minutes on Wednesday, this shooting victim's dad gave Trump an impassioned plea for stronger security at schools.

"It could stop if we all work together and come up with the right idea that school safety... it's not about gun laws right now. That's another fight, another battle," Andrew Pollack said to Trump at the meeting at the White House, which was billed as a "listening session," according to People. "Let's fix the schools, and then you guys can battle it out, whatever you want, but we need our children safe." Pollack's daughter, 18-year-old Meadow Jade Pollack, was shot nine times and killed in the Parkland school shooting.

"It’s enough! Let’s get together, work with the president, and fix the schools. That’s it. No other discussions," Pollack continued. "Security, whatever we have to do. Get the right people, the consultants ... These are our commodities. I'm never gonna see my kid again."

Pollack argued in his speech that the safety of children and schools should be a bigger priority than overarching gun safety laws at the moment. While many people are mostly focused on the issue of reforming gun safety laws right now (including the Parkland survivors who are organizing the March For Our Lives demonstrations), Pollack urged Trump to up the security at schools to prevent another shooting from happening than gun safety reform could.

While stronger security definitely could help this issue, especially immediately, preventing people from so easily getting their hands on assault rifles in the first place would likely be a more effective measure in the long run. Still, Pollack makes an interesting point, and it's no surprise his emotional speech is going viral — not only for his specific tactic, but also for the candor and bluntness with which he addressed the president. (Trump sits silently listening throughout Pollack's nearly four-minute speech.)

Shooting survivor Sam Zeif is also making headlines for his speech at the listening session. His best friend Joaquin was killed in the attack. "I was reading today that a person, 20 years old, walked into a store and bought an AR-15 in five minutes with an expired ID. How is it that easy to buy that type of weapon?" Zeif asked, through tears. "How have we not stopped this after Columbine, after Sandy Hook? I’m sitting with a mother that lost her son. It’s still happening.” He then explained how after Australia experienced a school shooting that left 35 people dead in 1996, the country put together new gun legislation. Since then, Australia has had zero school shootings, according to Fortune.

“We need to do something, and that’s why we’re here,” Zeif continued. “So let’s be strong for the fallen who don’t have a voice to speak anymore, and let’s never let this happen again. Please, please.”

Hopefully these emotional appeals help convince lawmakers that something desperately needs to be done in order to prevent yet another tragedy from happening.

More Like This
This Mom Gave Birth On Graduation Day, So The University Brought Her Degree To Her
This Underwear-Clad Mom Saved Her Pet Goose From An Eagle While Breastfeeding
Johnny Depp’s Fans Are Harassing His Daughter Lily-Rose Online & It’s Not OK
Lawmakers Passed Two Bills To Address The Baby Formula Shortage