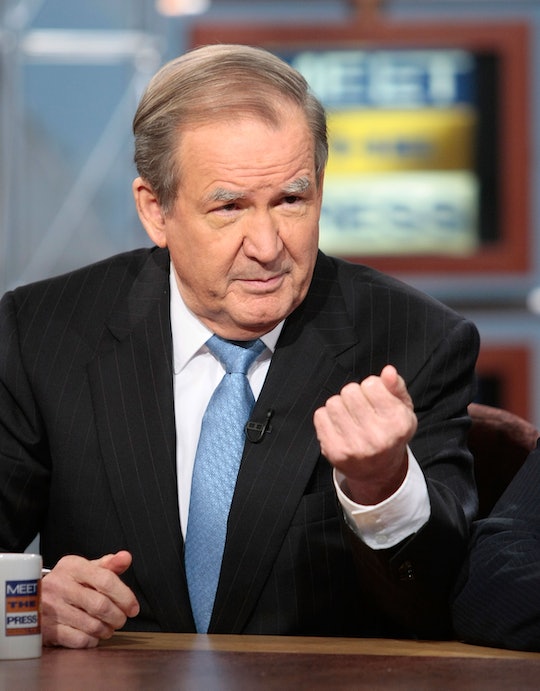 Pat Buchanan's Donald Trump Column Was Completely Out Of Line

Business mogul and former reality TV star Donald Trump has built his presidential campaign around racism, xenophobia, and the seemingly unending slew of insults spewing from his mouth and populating his infamous Twitter account. Trump kicked off his controversial run by first categorizing Mexicans as "rapists" and "murderers" in his first official campaign rally. Since then, he's derided women based on their appearances, proposed banning all Muslims from entering the United States as a way to fight terrorism, and publicly mocked Native Americans in response to Massachusetts Sen. Elizabeth Warren's Twitter critique of him. And that's just a quick, heavily abridged overview. Trump has also made uninformed and incredibly offensive statements about just about everyone except white men — but if you believe what uber-conservative political commentator and onetime presidential candidate Pat Buchanan has to say about it, that's what makes Trump "The Great White Hope." At this point, it's safe to say that Buchanan's recent Trump column was completely out of line.

On Thursday, Buchanan published a column lamenting the perceived fall of the middle-aged white man in American society to Town Hall's website and his own blog, wistfully reminiscing about when white men were the only doctors, journalists and lawyers, the only presidents and capitalists, and the only ones who got to portray detectives and cops of TV.

In the column, Buchanan blames affirmative action, immigrants, and, apparently, diversity in general for what he portrays as the disenfranchisement and plight of white men, and appears to blame the existence of racial minorities for the fact that death rates among white men are rising. His comments ignore historical oppression and systemic racism minorities have long suffered in this country, and creates make-believe world where white men are the only victims — or that they are victims at all. He writes:

White males, now down to 31 percent of the population, have become the only Americans against whom it is not only permissible, but commendable, to discriminate.

“Angry white male” is now an acceptable slur in culture and politics. So it is that people of that derided ethnicity, race, and gender see in Donald Trump someone who unapologetically berates and mocks the elites who have dispossessed them, and who despise them.

Buchanan writes as though affirmative action exists solely to "[demand] fewer white males in the work force and in the freshman classes at Annapolis and Harvard." He's utterly unwilling to understand that it exists simply to encourage equality, as minorities have historically not had the same opportunities as white men thanks to racial ills like slavery and segregation, meaning that the success chasm between them had the potential to ever-widen without intervention. And while Buchanan slams illegal immigrants for the "economic decline of the white working class," Forbes reported that the influx of immigrants actually raises American workers' wages because it frees them up to focus on specialized tasks that require a mastery of the English language.

In his piece, and subsequent elaboration on it on CNN over the weekend, Buchanan writes as though white men are constantly attacked and discriminated against, when in fact whites continue to have more opportunities than other groups. A 2014 study, for example, found that a white high school dropout is just as likely to get a job as a black college student, and CNN reported last year that whites have 10 and 12 times more wealth than their Hispanic and black counterparts, respectively.

In short, white men are the ultimate beneficiaries of white privilege, and they are by no means disenfranchised or otherwise downtrodden. Talking heads like Buchanan arguably panic then when the United States elects a black president, for example, because progress like that poses a threat to the status quo that has consistently favored white men. His most recent comments seem fueled by the fear that white men may not always have unearned advantages as those who have been oppressed find ways in which to thrive. Donald Trump has managed to convince the white men who support him that they have become outsiders, when in reality they are anything but.

By promising to do things like build a wall along the Mexico-United States border and questioning whether President Obama was born in the United States, Trump purports to defend America, and afford white men protections they do not need. To paint him as the savior this country needs could not be further from the truth.