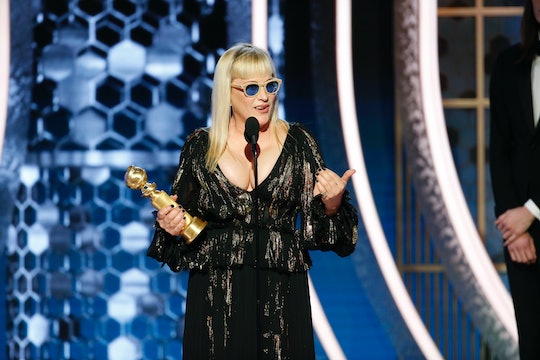 Awards shows serve as an opportunity for those at the top of their game in the film industry to thank everyone who contributed to their success. They're also sometimes used by celebrities as a platform — and on Sunday night, Patricia Arquette implored us all to vote "for our kids and their kids" during her powerful Golden Globes speech.

Although host Ricky Gervais warned Golden Globes winners to avoid politics in their acceptance speeches, plenty of winners gave precisely zero f*cks about this advice. And Arquette — who won the award for best supporting actress in a limited series for her role in Hulu's The Act — was among them. In fact, that was pretty much all she talked about.

“I’m so grateful to be here and celebrate this, but also I know tonight, January 5th, 2020, we’re not going to look back on this night in the history books," Arquette began her acceptance speech. "We will see a country on the brink of war, the United States of America. A president tweeting out a threat of 52 bombs, including cultural sites. Young people risking their lives traveling across the world. People not knowing if bombs are going to drop on their kids’ heads. And the continent of Australia on fire."

One of the most memorable snippets from Arquette's speech, however, came in the form of a plea for Americans to carry out their civic duty.

Plenty of viewers in the Twitter-sphere loved that Arquette used her acceptance speech to draw attention to important issues. One person tweeted, "Good for Patricia Arquette using her Golden Globe win address to talk about a country on the brink of war, Australia on fire, and urging us all to vote. She has my 100% respect for that."

Another Twitter user wrote, "Patricia Arquette needs to win an award every year just to do what she just did there."

Yet another person declared, "Patricia Arquette, tits out, sunglasses on inside, zero f*cks to give = who i wanna be in 2020."

Between Patricia Arquette's impassioned plea to get out the vote and Michelle Williams' support for a woman's right to choose, there was no lack of political talk at the 2020 Golden Globes. And you know what? Good for them. The way I see it is: If you have the influence and the attention of millions of viewers, that's actually the perfect time to raise awareness for the causes that matter.