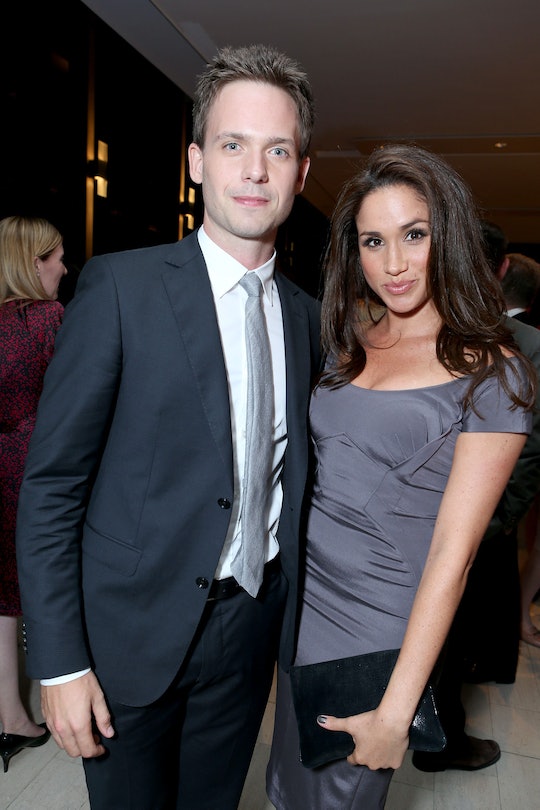 People definitely miss seeing Meghan Markle on their TV screens as Rachel in Suits. But there is a possibility that the Duchess of Sussex could be reuniting with her Suits costar, Patrick J. Adams — just not in the way they would expect. Instead of reuniting on screen, they could be coming together on the playground with their kids. In a new interview, Adams joked about royal play dates with Markle, and honestly it sounds like a fantastic idea.

Although Adams and Markle's characters might have been love interests in Suits for seven seasons, it's clearly different in real life. Markle married the United Kingdom's Prince Harry last May and are currently expecting their first child together. But just because Markle is no longer acting doesn't mean that she can't still keep in touch with her Suits costars, like Adams. And after Adams welcomed his first child, with wife, Troian Bellisario, in October, the two former on screen love interests now have kids in common, according to the Hollywood Reporter.

So, it makes complete sense that Adams would joke about meeting Markle and her child for a play date somewhere down the line. On Friday, during a red carpet appearance, Adams told Entertainment Tonight that their kids could get along famously. But he has one stipulation for the playdates — they have to take place across the pond.

He has a point. Markle's Frogmore Cottage is very nice.

But while play dates could be in their future, Bellisario and Adams don't necessarily expect Markle to come to them for parenting advice — especially since they're figuring the whole parenting "thing" out themselves, too.

"We've shared exactly zero tips with her, because I don't think Meghan needs any tips about anything," Adams told Entertainment Tonight.

"She looks like knows what she's doing," Bellisario added.

This might be true. However, it's very cool that the couple can be present for this chapter of Markle's life in some way or another — especially since they attended the royal wedding last year.

And since Markle will not reportedly be making a guest appearance on Suits any time soon, according to Harper's Bazaar, fans of the show can find comfort in the fact that Markle and Adams could possibly reunite on the playground with their kids, somewhere down the line. Awww.

Needless to say, Markle and Prince Harry's child will have plenty of famous friends for play dates once they're born. Markle's close friend, tennis player, Serena Williams, has an adorable 1-year-old daughter, Alexis Olympia, who will likely get along famously with Markle's kid. And if their baby is looking for two best friends, then they will definitely find them in George and Amal Clooney's adorable 1-year-old twins, Ella and Alexander.

There are so many reasons why Markle and Prince Harry's baby might be the coolest baby in the world when it arrives into world in April — and it could be because of all of their super awesome friends that they already have.