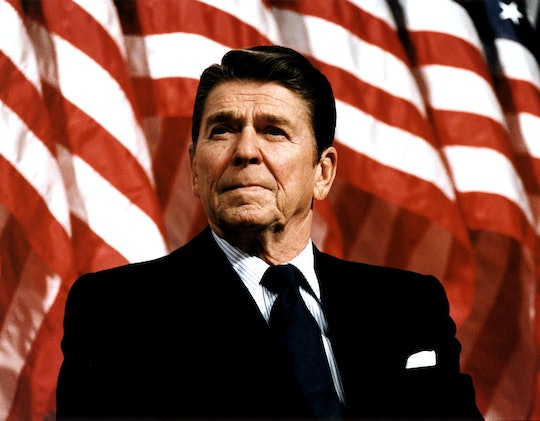 Patti Davis, Ronald Reagan's Daughter, Says Her Dad Would Be "Appalled" at the GOP Candidates

Quick, someone get a whole bunch of ice packs ready, because Patti Davis, daughter of former Republican president Ronald Reagan, just doled out some sick burns on the entire clown car of GOP presidential candidates. In a recent Sirius radio interview, Davis said that Reagan would be "so appalled at these candidates." Ouch. That's got to hurt worse than Bruce Springsteen's continued refusal to be friends with Chris Christie.

Reagan, who survived an assassination attempt in 1981, would be similarly appalled at the level of gun violence in America today, said Davis. On the ten-year anniversary of his assassination attempt, Reagan penned an op-ed for the New York Times in support of the Brady Bill, named for his press secretary who was killed that day. The bill, which mandated background checks and waiting periods before one can procure a firearm, finally became a law in 1993. Reagan also supported a 1994 ban on assault rifles (the preferred weapon of mass shooters), which George W. Bush allowed to expire in 2004.

When asked about Ted Cruz's constant name-checking of her dad, Davis said, "They all kind of do it. But yet, they are so not like him." Back in September, when Cruz visited The Late Show with Stephen Colbert, the talk show host pointed out that Reagan also raised taxes and supported amnesty for undocumented immigrants, two things Cruz would never get behind.

Reagan also raised the debt ceiling 18 times while in office, something that Clinton and Obama couldn't do without Congress flipping their lids and shutting down the government in response. And in 1967, when he was the governor of California, the patron saint of Republicans, Ronald Reagan, signed the California Therapeutic Abortion Act into law. Whereas California previously allowed abortions only if the mother's life was endangered, the new law allowed for abortions if a pregnancy threatened the mothers' physical or mental health. That was six years before Roe v. Wade.

As much as today's Republicans love to invoke the name of Ronald Reagan, it seems their politics actually have very little in common with his. Davis agrees: "I don't think he would be a Republican. If another Ronald Reagan came along right now, I don't think the Republican Party would accept him."