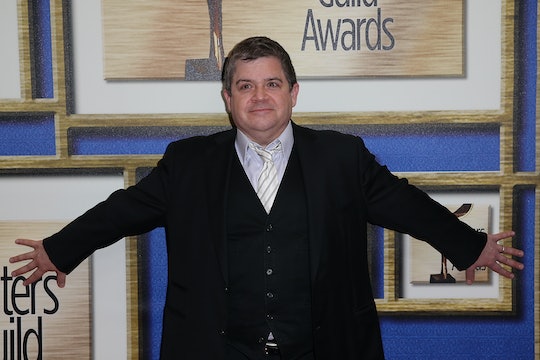 Fans have come to love Patton Oswalt as a raucous, biting, dark comedian that can slice and dice and even turn the most complicated of topics on their head with ease. But the loss of Oswalt's beloved wife, Michelle McNamara, has totally rocked the sharp-witted funnyman and his 7-year-old daughter, Alice. So now he's turned his observational genius inward and took to Facebook to give the world a detailed report. Patton Oswalt's status about losing his wife is a heartbreaking and vivid description of what it feels like to be in the depths of grief.

More Like This
Exclusive: Teen Artist Tyler Gordon Reveals The “Ultimate Hero” He Wants To Paint
Here Are 25 Shows You Can Feel Good About Your 2-Year-Old Watching
Meghan Markle & Prince Harry Donated Cute Beanies For Archie’s 2nd Birthday
Everything You Need To Know About Prince Harry & Oprah Winfrey’s Series

And once you read it, you'll grieve right along with him.

He starts off by comparing his crushing grief to depression. He opens the Facebook post with a simple statement, "Thanks, grief," he wrote. "Thanks for making depression look like the buzzing little bully it always was."

Oswalt's wife, Michelle McNamara was a crime writer and died suddenly in her sleep at just 46 years old, according to the Hollywood Reporter.

Oswalt explained, "Grief is Jason Statham holding that 4th grade bully's head in a toilet and then fucking the teacher you've got a crush on in front of the class. Grief makes depression cower behind you and apologize for being such a dick."

He goes on to explain that grief just is. There's nothing to be gained, or any of the proverbial "silver lining" to the sudden death of your wife. Instead grieving is more like survival. Oswalt wrote that, after being "face-down and frozen for weeks," he wondered if "maybe 102 days later I'll be walking."

Oswalt, 102 days into the death of his wife, seems to be coming to terms with the fact that her loss isn't something he'll ever be able to, or even want to, "get over." Instead he'll have to learn to live again as a completely different person, one living his life, and raising his Alice without his wife.

"And, if you're a parent?" he continued. "You'll wish you were your kid's age, because the way they embrace despair and joy are at a purer level that you're going to have to reconnect with, to reach backwards through years of calcified cynicism and ironic detachment."

For how, he said he's finishing the serial killer book about "The Golden State Killer" that McNamara was working on when she died. And he said he's almost ready to get back to work.

And I'm going to start telling jokes again soon. And writing. And acting in stuff and making things I like and working with friends on projects and do all the stuff I was always so privileged to get to do before the air caught fire around me and the sun died. It's all I knew how to do before I met Michelle. I don't know what else I'm supposed to do now without her.

I hope Oswalt gets back to doing what he loves very soon and that he and Alice are able to find some peace, and maybe even a laugh or two to help them through their next 102 days.

Now if you'll excuse me, I could use a good cry.