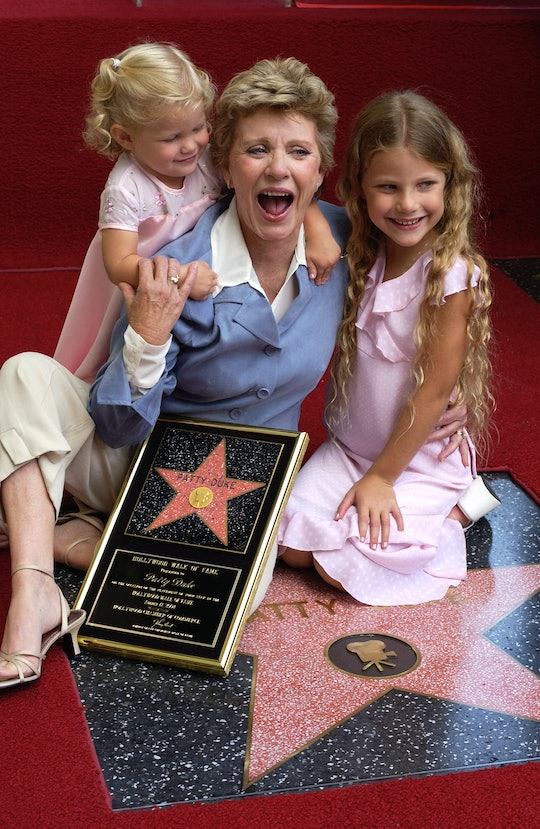 Oscar-winning actress, singer, and author Patty Duke died Tuesday morning at age 69, according to ABC News, due to sepsis caused by a ruptured intestine. Duke, whose birth name was Anna Marie, will definitely be remembered for her acting, particularly for her roles in The Miracle Worker and The Patty Duke Show — but she also leaves behind an incredible legacy through her advocacy for mental health awareness. Patty Duke's contributions to mental health awareness made it easier to discuss mental illness in a time when it was often stigmatized. Now that Duke has passed away, her son, Sean Astin, hopes to continue her work by founding the Patty Duke Mental Health Initiative.

Duke was drawn to advocacy after her own struggles with mental health. The first time the American public realized something might be wrong was during Duke's strange, rambling acceptance speech for an Emmy award in 1970. The press speculated that she was on drugs, but Duke later revealed that she was at one of her lowest points while struggling with an undiagnosed bipolar disorder.

"That was the first public moment that anyone knew there was a chink in this armor," Duke later told The Los Angeles Times. She explained that she hadn't slept in three weeks before that Emmy award show. "That's the chemical imbalance at work. The depressive side no one saw except a doctor, and that was occasional because during the depressive end I would lie in bed and cry for weeks and months on end."

It wasn't until 1982 that Duke was diagnosed, a fact that she revealed in her 1987 book, Call Me Anna. She wrote her autobiography very openly, and later made a film of the same name. "It's not a giant thrill to hear someone give you the label manic-depressive, but to me I was so relieved," Duke told The LA Times. "What I was suffering from had a name and could be treated."

Her decision to share her story was an easy one. "If someone happens on something in this book that gives them hope, that makes them hang in there... then I feel that I've done something," she told The LA Times. She went on to work with the National Institute of Mental Health and the National Alliance on Mental Illness, according to Entertainment Weekly, and in 1992, wrote A Brilliant Madness: Living With Manic-Depressive Illness. She discussed her reliance on alcohol and sex before treatment, and how lithium changed her life.

Reviews for A Brilliant Madness show the very real effect Duke's writing had on readers. Karla Clippinger wrote, "Patty Duke's words saved my life." An anonymous reviewer wrote, "It was so reassuring to read of the struggles this obviously intelligent (and sane!) woman had gone through." Yet another wrote, "After reading this book, not only was I able to accept the illness, but understand it. I didn't feel so alienated. I didn't feel helpless anymore."

Duke was also incredibly candid in interviews about how her bipolar disorder affected her family life and parenting. In a 2015 PBS show called Speak Your Mind, Duke told the host:

I was still wonderful in front of the American public [before treatment], but at home I was outrageous in my anger and my acting out of that anger. All I ever wanted to be in my life was a mom, and during the years before I got treatment, I became the kind of mom that no one wants to be near. My kids would come home from school — they didn't know what was going to be on the other side of the door.

Duke mentioned in her LA Times interview that some of her biggest supporters had been her sons. That's something that continues to this day, it seems, since her son Astin anncounced on Facebook Tuesday that her work will live on in the Patty Duke Mental Health Initiative, which he is now working on crowdfunding.

Personally? I can't think of a better legacy to leave behind.