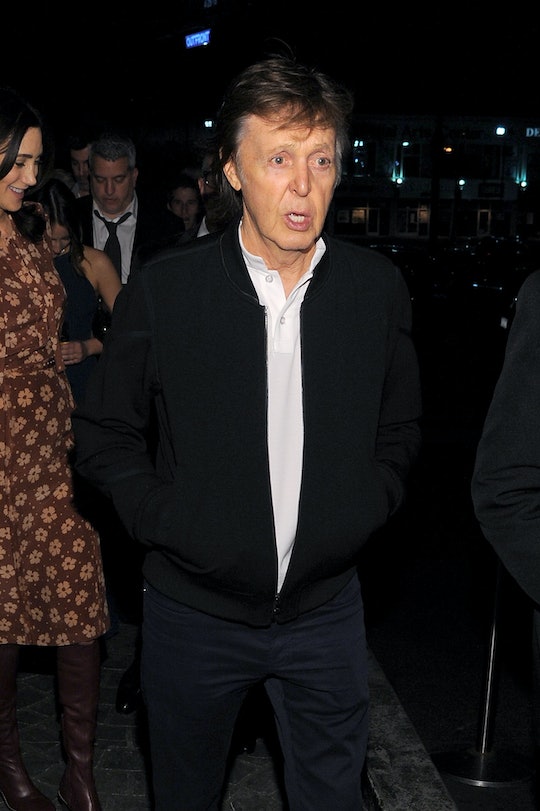 While the bouncer did whatever bouncers do when they pretend to check on something just inside the door, you can hear McCartney trying to be a good sport about it in the video. He turned to his squad and joked, "How VIP do we gotta get?" He keeps going, joking that the three "need another hit." Then Beck did that thing you do when an authority figure is finally going to take charge.

He profusely thanked the other door man who appeared to go in to check on the status of their cool-ness. But the musicians' manners and good humor have nothing on Tyga's security. They were allegedly told to leave. Again. I don't know about you, but it makes me feel better about the coffee I spilled on myself this morning that a Beatle, Beck, and a Foo Fighter couldn't get into a party. Not everyone is totally awesome all of the time. It's kind of inspiring, right?

But Paul McCartney? There's something totally wrong with the world if Paul McCartney can't do whatever he darn well pleases. But it just wasn't going to happen. TMZ followed up with Tyga himself and Lil' Bow Wow as they left the party on Tuesday morning. Tyga ignored the pap's questions but Bow Wow was as shocked as everyone else was. "You gotta be lying... there's no way," he said, shaking his head and taking it all in. He explained the scandal to his friend, "That's a Beatle."

But then Bow Wow took the opportunity to offer some explanation to TMZ, and America, as to why those old guys didn't get into the party. "It's a new generation," he said. He then suggested in the politest way possible that maybe it's just that McCartney isn't young and doesn't go out often. "We really go out," the rapper reasoned. If you think about it (I mean, really try to think about it), that sort of makes sense.

One other very logical question to ask yourself is why McCartney, Beck, and Hawkins were trying to go to Tyga's after party in the first place. It just seems a little awkward, right? Maybe they felt McCartney, Beck, and Hawkins needed to party with people from their own generation, and maybe Tyga and company were just keeping it a "friends-only" bash. Who knows. McCartney and his wingmen were later spotted at Hyde attending the Republic Records party. So at least we know their epic star status was accepted somewhere.