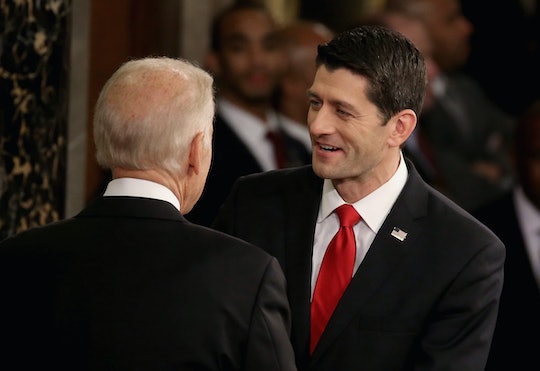 Paul Ryan took on the job of House Speaker hoping to strengthen conservatives and bring a firm resolve back to the Republican Party — but at Tuesday's State of the Union address Ryan seemed more bored than anything else. Not that it was such a bad thing. Instead, the House Speaker's misfortune ended up being everyone else's gain, because seriously, just look at all those hilarious Paul Ryan State of the Union memes.

More importantly, make sure you check out Ryan's RBF (that's "resting bitch face" for anyone unaware), because that's definitely going to be a thing going forward, and his glassy-eyed stare (is he trying to see into the depths of your soul? Figuring out what to make for dinner later?). It's a bit unusual, considering how energetic and spirited the Wisconsin Republican has seemed in previous appearances.

Take, for example, Ryan's 2012 vice presidential campaign with GOP presidential nominee Mitt Romney: Between the two of them, the Janesville native was slated to be the more vivacious one, giving Romney a boost in the polls and bringing a fresh outlook to the Republican ticket. It worked — sort of. Although the two didn't win (thanks a lot, Obama), their campaign ended up being one of the more exciting in recent years, drawing huge crowds and giving conservatives the focus they needed to hit on broader economic issues that they so often favor.

None of that matters, however, because that clearly wasn't the same Paul Ryan that showed up at Tuesday's SOTU address. I mean, look at him:

Seriously, Mr. Speaker. I can't even.