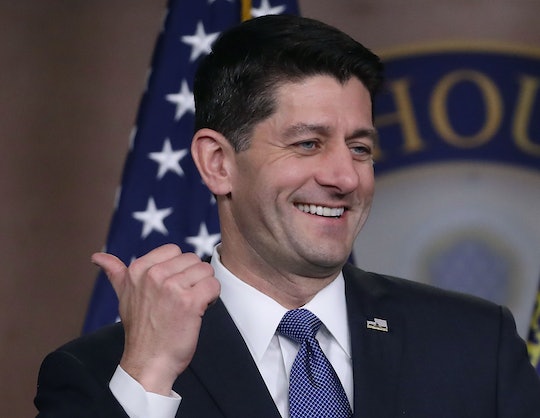 Paul Ryan Might Be Retiring, & The Internet Has *A Lot* Of Thoughts About It

On Thursday afternoon, just one day after House and Senate Republicans reconciled their horrendous tax plans, Politico published a lengthy report claiming that House Speaker Paul Ryan is retiring next year, once his tax reform goal is complete. Buoyed by the expected success of Wednesday's agreement, the site wrote, "Ryan remarked to several colleagues how this day had proven they could accomplish difficult things," and he may now be setting his sights on overhauling Social Security, Medicare, and Medicaid, his other white whales, before taking off for good around Election Day 2018. Ryan has denied the claim, and his office didn't immediately respond to Romper's request for comment.

The idea that Ryan might quit his job after just three years, having accomplished little more than the two things he was actually interested in, isn't sitting well with some people. It's no secret that he was very reluctant to take the Speaker position in the first place, and according to Politico, he told told his predecessor, John Boehner, "that it would be his last job in politics — and that it wasn’t a long-term proposition." Ryan garnered disdain in 2016 when he continuously waffled between supporting and opposing then-candidate Donald Trump, and now, the idea that he might spend his last days effectively making retirement impossible for millions of Americans, before taking his own early, comfortable retirement at age 48, has some questioning his ethics.

Ryan told a group of reporters on Thursday, "I ain't goin' anywhere," according to CNN, but it seems that few in his inner circle believe him. Politico's report was sourced from three dozen people who know him personally, and "not a single person believed Ryan will stay in Congress past 2018."

CNN spoke with three close friends of Ryan who believe he'll leave after the 2018 midterm elections, or perhaps sooner, with one citing the speaker's chronic case of "Trump-haustion" as a possible cause, a portmanteau so weirdly specific, I bet Ryan knows exactly who said it.

Multiple sources also told CNN that Ryan "particularly dislikes the toll the job takes on his family," as if he plans to stay at home with his three children after retirement so that his wife, Janna, can finally utilize her Wellesley College and George Washington Law School degrees.

But once he becomes known as the man who was instrumental in slashing the corporate tax rate from 35 percent to 21 percent, and lowering the individual rate for wealthy Americans from 39.6 percent to 37 percent, many Twitter users think he'll no doubt have his pick of cushy consulting jobs from billionaires that want to show their gratitude.

Politico explains Ryan's denials by pointing out that admitting he's a lame duck would hinder his fundraising and deal-making leverage in his final year. Gotta go out with a bang!

Worst of all, critics see Ryan as a man who was determined to have his cake and eat it, too. He took the Speaker position, but only after ensuring that it wouldn't cut into his free time (despite voting against regular Americans having the same privilege). He stuck around for a couple years, but only so that he could spearhead the two issues that were important to him.

And although he still occasionally offers tepid criticism of some of Trump's most abhorrent behavior — his sexist attack on news anchor Mika Brzezinski wasn't "an appropriate comment" and "he messed up" when he called Nazis "very fine people," for example — Ryan's always careful not to burn any bridges with the president.

Just as Trump's "both sides" rhetoric after the Charlottesville rally backfired miserably, Ryan's now seen by some "classic" Republicans as a sellout, while the alt-right bemoans his lukewarm acceptance of their dear leader.

The Democrats, of course, never liked him to begin with, but now they have even more fuel for the fire.

The all-around consensus is a resounding "good riddance."