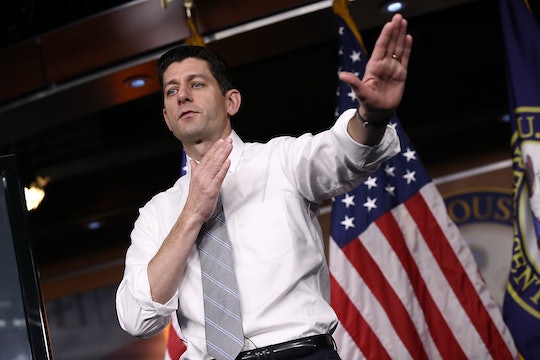 On Thursday, House Speaker Paul Ryan shared his "What I Did Over The Summer" book report — I mean, explainer presentation for the "Obamacare" replacement bill, called the American Health Care Act. In a weekly press briefing, Ryan literally rolled up his sleeves — because the GOP is hard at work, get it? — and showed reporters an actual PowerPoint presentation in an attempt to explain the House Republicans's plans to repeal the Affordable Care Act. Paul Ryan's defense of the American Health Care Act is... something else. And by something else, I mean some kind of alternate universe in which the GOP alone must exist.

Between Ryan's low rent TED Talk and his 729-word op-ed titled "Our health care plan for America" in Tuesday's USA Today, Ryan is working his little P90X butt off to make a convincing case for a healthcare bill that politicians on both sides of the isle don't like. Seriously: Experts have said the AHCA is just bad policy, or as Connecticut Sen. Chris Murphy so eloquently called it, it's a " dumpster fire of a bill that was written on the back of a napkin behind closed doors because Republicans know this is a disaster."

You can see why Ryan might have his work cut out for him. But here are the bigger issues with his defense: They're just not based in any kind of reality.

The first and most outrageous claim that Ryan makes in his op-ed defending the AHCA is that "there is no more urgent problem than Obamacare." Um, really? Because I thought that whole "Trump's ties to Russia" issue and the fact that the GOP is dragging its heels on investigating the matter seems a bit more urgent than a health care bill they've been whining about for the past eight years but only managed to write in the last year.

Yes, healthcare reform is urgently needed, but America faces some much, much bigger and more urgent problems — like the fact that President Trump flat out lies to the American people regularly.

"An Act Of Mercy"

On Tuesday, Ryan called the repeal and replacement of the ACA "an act of mercy" in a press conference. Tell that to the estimated 10 million people who will lose insurance coverage if the AHCA becomes law, according to a report from S&P Global Ratings. At that same press conference, when specifically asked whether it was acceptable that up to 10 million people could lose their insurance, Ryan offered this rather merciful response: "Look, what matters is that we're lowering the cost of healthcare and giving people access to affordable healthcare plans."

But even then those claims — both lowering the cost of healthcare and giving people access — are based in some other reality than what's actually written in the House healthcare bill. Costs will inevitably go up (more on that below), but access to healthcare will most certainly be reduced, thanks to the continuous coverage provision for preexisting conditions, massive Medicaid restructuring, and the explicit defunding of Planned Parenthood.

"Lowering The Cost Of Healthcare"

This is one of the other big claims that Ryan and others have made about the AHCA — that it's going to be cheaper for everyone. Unless, of course, you're over the age of 50. Or if you relied on ACA subsidies to pay for your premiums — those same subsidies that the GOP plans to cut entirely. Or if you need Medicaid after 2020. Or if you plan on having kids, because maternity care might no longer be covered under the replacement plan. Experts agree that healthcare costs will rise under "Trumpcare." "The bill does not measure up well," wrote a group of economic and healthcare policy experts for Vox. "For all but the youngest individuals, it increases both overall costs and the risk of a financially devastating event."

Republicans also have put out this idea that by removing the individual mandate, healthcare will be cheaper for everyone. Either the GOP is really running wild with alternative facts, or they genuinely don't understand how health insurance is supposed to work: Large groups of people pay premiums in order to offset the medical costs used by some people.

By removing the mandate, healthy individuals have no incentive to continue paying for and getting health insurance. That was actually a huge challenge that the Obama Administration faced, forcing them to do extra outreach to get millennials to buy into the idea of mandated healthcare. When healthy people pull out of insurance groups, the cost goes up for everyone that's still in the insurance group — and it's these people that often need the healthcare coverage the most.

Bottom line: Ryan's defense of the American Health Care Act just doesn't hold up to facts, but then again, why would the GOP let a little thing like "facts" get in the way of forcing its party's "sucks to be poor" agenda on the American people?