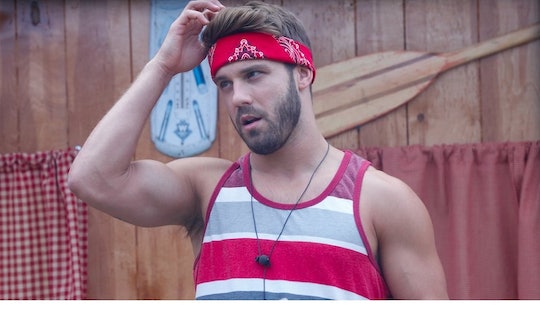 On Big Brother, you're bound to say one thing that's just completely stupid. You have a camera on you at all times, so it happens. But, there's a difference between saying something stupid and something sexist. Paulie Calafiore's true colors were shown on Big Brother after a series of sexist remarks inside of the house, but perhaps nothing was as telling as the comment he made while speaking to Julie Chen. Paulie Calafiore's comment about women crying made his eviction that much sweeter for those of us who were looking forward to his eviction — so, bye Paulie. Don't let the door hit you on the way out.

During the live broadcast, Paulie was evicted from the house. It wasn't a tough decision for anyone — he was the lesser of two Big Brother evils for the houseguests (plus, can you really evict a man who was dressed in an Americana unitard?). So, with Paulie out of the house, and a one-way ticket in his hand, Julie got down to grilling Paulie. As fans saw, his demise was rather sudden. He truly went from hero to zero in the house, but that wasn't without him trying to save himself. His personal tactic seemed to be through tears. Unfortunately, according to Paulie, crying works better for women than it does for men. Right.

First of all, suggesting that women cry to get ahead in someway is not only insensitive, but it's completely incorrect. The stigma that women cry to get their way is completely unfounded and remarkably sexist. Women are allowed to be as emotional as they want. If they choose to cry, they shouldn't have to worry about being criticized for it. Criticizing a woman for crying is telling her, "Hey, your emotions right now don't matter." And guess what, Paulie and whoever else thinks that crying is used for manipulation, that's not cool.

Let's also talk about the fact that Paulie went after two women who he consistently criticized for crying. Tiffany was Paulie's number one target, so obviously if her crying was a suppose to do some "work" for her game, it didn't actually "work." Michelle also faced the wrath of criticism for crying, which didn't help her much either when she was basically public enemy number one for a few days during Double Eviction week. There hasn't even been one woman on this show that has stayed because she was crying about being close to eviction.

You know what does work in this game, though? Good strategy. Paulie didn't have that. The women, however, seem to know how to make that work. Keep doing you, ladies.