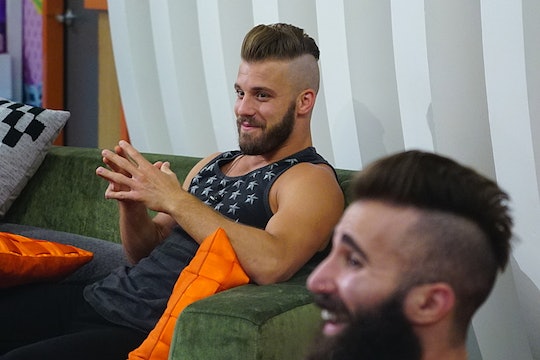 If you've seen any episode of Big Brother 18 you know that Paul is all about the friendship. Honestly, he says the word "friendship" at least once every episode. It's no surprise than that Paul has developed a best friendship with Paulie. Maybe it's because they basically have the same name (and now the same hair), but these two are now two peas in a pod. They have taken their friendship so far Big Brother 18 fans are beginning to see a lot of similarities between Paulie and Paul. The similarities are becoming so outrageous Big Brother even made a segment about it in a previous episode.

It all began with Paulie's haircut. Due to their friendship, Paulie entrusted Paul with the task of cutting his hair, and Paul gave Paulie the same cut Paul has, solidifying their twin status. From there, Paulie began adopting Paul's sayings. You can now hear Paulie saying things like, "Pissed!" and "Friendship!" and "Your boy!" It's almost as if Paulie dropped the "-ie" in his name and has officially become Paul 2.0. Paul and Paulie have truly entered a bromance and their former best friends in the house, Corey and Victor, have been promptly kicked to the curb. Paul and Paulie have even given their bromance a name, now referring to themselves as "PP". Fans seem to have mixed feelings on this budding friendship, with some in full support and others in extreme dislike of the new duo.

No matter how you feel about the twins, they're definitely not going anywhere any time soon. With Paul as HOH this week and Paulie winning the POV they'll both be in the house for at least another week. Plus, with the way Paulie dominates the competitions and Paul's excellent social game (remember how he was once friends with Jozea?) they definitely have a chance of making it to final two. The other houseguests better keep an eye out for these two because right now they're running the house.

If one of the twins aren't taken out soon, it'll probably be too late. Hopefully for the other houseguests sake Paulie won't win HOH again on Thursday, because if he does the twins will be in control of the house once again. Sorry Julia and Liz from Big Brother 17, the house has a new set of twins.