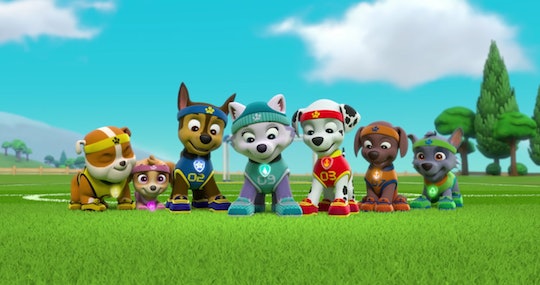 Despite What The White House Claimed, 'PAW Patrol' Has Not Been Canceled

Parents of PAW Patrol fans need not worry. The children's cartoon about search and rescue dogs is here to stay. Indeed, PAW Patrol has confirmed it is not canceled despite previous comments from White House Press Secretary Kaleigh McEnany that suggested otherwise.

"No need to worry," the Nickelodeon show tweeted Friday from its official Twitter account. "PAW Patrol is not canceled."

Earlier in the day, McEnany had claimed the popular children's show had been the latest victim of cancel culture as a result of growing outrage over police brutality. While PAW Patrol members span a variety of industries and emergency services, including firefighters, paramedics, aviators, construction, recycling, aquatic rescue, and snow rescue, one of their original members is Chase, a German Shepherd who serves as a police dog.

"He's also appalled by cancel culture, and cancel culture specifically as it pertains to cops," McEnany told reporters of President Donald Trump during a press briefing at the White House on Friday. "We saw, a few weeks ago, that PAW Patrol, a cartoon show about cops, was canceled. The show Cops was cancelled. Live PD was cancelled. LEGO halted the sales of their 'LEGO City Police Station.'"

While McEnany was wrong about the cancelation of PAW Patrol, Cops and Live PD were both canceled following nationwide protests over the police killing of George Floyd and Breonna Taylor. Paramount Network announced in early June that it had canceled the long-running reality TV series Cops after some 32 seasons, according to Entertainment Weekly. Initially put on hiatus, Live PD, a reality TV show similar to Cops, was eventually canceled by A&E on June 11, NBC News reported.

The cancelation of Live PD came on the heels of reports the show had captured a 2009 encounter between Texas police and a Black man, who ultimately died in police custody. According to USA Today, Live PD crews filmed Williamson County sheriff's deputies stopping 40-year-old Javier Ambler for failure to dim his headlights. During that encounter, Ambler was held down and tasered four times by officers before he died. A&E told the USA Today network that Live PD had destroyed the footage it filmed of Ambler's death.

But along with being wrong about PAW Patrol, McEnany was also wrong about LEGO canceling sales of its LEGO City Police Station. According to CNN, LEGO only temporarily halted marketing certain police-related products in early June as part of the toy company's #BlackOutTuesday response. At no point did the company remove or halt sales of its LEGO City Police Station. "We did not halt sales of any LEGO sets, and any reports otherwise are false," LEGO told CNN.

Speaking to reporters from the White House on Friday, McEnany said she and President Trump found the cancelation of cop shows and toys "unfortunate" as they both felt police officers held vital jobs. "I stand with — and the president stands with — the 63% of Americans who think police officers are one of the most important jobs in this country," she said.

For now, however, your kids can still catch PAW Patrol on Nickelodeon and Nick Jr.