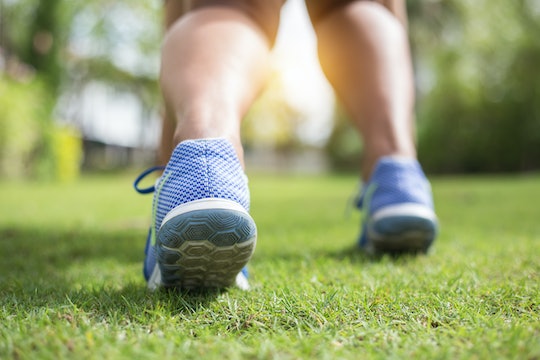 Although polycystic ovary syndrome (PCOS) is the most common hormonal disorder among women of reproductive age, affecting up to 15 percent of women in the United States alone, it remains a widely under-diagnosed and under-discussed health issue. One organization, however, is hoping to change that with an ambitious national campaign. PCOS Challenge is bringing awareness to this women's health issue and there's ways you can get involved.

"It is time for polycystic ovary syndrome patients and those who love and care for them to be heard," Sasha Ottey, the executive director of PCOS Challenge: The National Polycystic Ovary Syndrome Association, tells Romper. She argues that there are "serious and systemic problems in healthcare" when it comes to the diagnosis and treatment of PCOS. In fact, according to Ottey, some 50 to 70 percent of women who have PCOS go either undiagnosed or misdiagnosed, despite the fact that it's a preventable health problem if identified and addressed early on.

"For too long, the calls for help by millions of women and girls affected by PCOS across the country have gone unanswered," Ottey said in a press release emailed to Romper. "Our organization is seeing far too many women who were never diagnosed with PCOS until their 40s, or who were never told about the associated health risks, and are now battling diabetes, cardiovascular disease and cancer."

In an effort to continue driving awareness, PCOS Challenge recently launched what it has called the largest national campaign aimed at raising both funds and awareness for the fight against PCOS. Through 5K Run/Walk events hosted in 11 major cities across the United States, the organization hopes to raise money to fund additional programs focused on awareness, education, support, health screenings, as well as grants and research.

"For over a decade, PCOS Challenge has been a global leader in the PCOS awareness and advocacy movement by galvanizing patients, researchers, celebrities and healthcare professionals to raise their voices, share their experiences and drive change," Ottey tells Romper. She notes that the PCOS Challenge 5K Run/Walk events are aimed at "raising the profile of PCOS and bringing attention to the significant need for better education, diagnosis, treatment and care as well as the need to increase the quality of and funding for PCOS research."

While PCOS Challenge launched its campaign last week in Detroit, events are expected to continue on a rolling basis throughout the rest of the year in Philadelphia, Los Angeles, Houston, Atlanta, Orlando, Tampa, Newark, Washington, D.C., St. Louis, and, finally, Sacramento.

For those that live near one the 11 cities hosting the the PCOS Challenge 5K Run/Walk, one of the best ways to get involved is to sign up to run or walk in the event and ask folks to sponsor your walk. If group activities are more your style, consider getting a few friends or coworkers to join you and organizing a team to walk. You may also consider asking if your employer offers a program in which it matches charitable donations, thereby doubling any donation you make to PCOS Challenge.

PCOS Challenge is currently offering a number of incentives to encourage walkers to fundraise for the event. What's more, those unable to join a nearby PCOS Challenge 5K Walk/Run can still get involved by looking for an individual or team of walkers to sponsor or simply donating directly to the campaign. And every dollar counts. According to the official PCOS Challenge 5K Walk/Run website, the campaign had raised $17,250 of its ultimate $100,000 goal as of Wednesday afternoon.

Thanks to the efforts of organizations like PCOS Challenge, the PCOS Awareness Association, and even celebrities like MTV Teen Mom OG star Maci Bookout, more and more folks are beginning to talk about PCOS.

While PCOS can cause irregular periods, severe acne, weight gain, hair loss, excess facial or body hair, and small cysts in the ovaries, it's also the leading cause of infertility, according to the U.S. Department of Health and Human Services' Office on Women's Health. What's more PCOS may also increase your risk of developing other health issues such as diabetes, depression or anxiety, and endometrial cancer, making diagnosis and treatment of PCOS vital.

"PCOS should be included in all conversations and efforts to prevent issues such as type 2 diabetes, cardiovascular disease and maternal and fetal health complications," Ottey said in a press release. "There is an urgent need to address PCOS to help improve and save lives. It is time that we make PCOS a public-health priority!"

Consider helping to bring awareness to this important women's health issue by getting involved in PCOS Challenge's national awareness campaign.