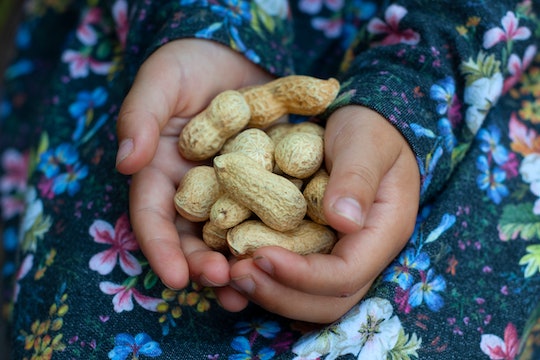 For parents of children with a peanut allergy, something as simple as a class picnic can be dangerous ground. And with conflicting expert recommendations and few treatment options, the risk is daunting. But a new peanut allergy treatment for children could be approved by the U.S. Food and Drug Administration (FDA) very soon — offering parents options to reduce their child's risk.

The FDA's Allergenic Products Advisory Committee met on Friday and voted in favor of approving the drug Palforzia, NPR reported. This drug was designed to minimize the number and severity of allergic reactions in children aged 4 to 17. The FDA's vote on Friday was not the final say in whether or not the drug will be approved; the FDA will make its final decision for approval by January. However, the odds of approval are high, according to CNN, as the agency tends to vote like the advisory committee.

Should the drug be approved, Palforzia will be the first FDA-approved treatment for peanut allergy. Jayson Dallas, CEO of drug manufacturer Aimmune Therapeutics said in a statement that the drug will serve a vital purpose. "We are very pleased that the FDA Allergenic Products Advisory Committee has voted in support of Palforzia," he said, according to Bloomberg. "This recommendation recognizes the urgent need for patients to have a treatment option for their potentially life-threatening allergy."

The need is certainly urgent. Roughly 1.2 million children and teens in the United States alone suffer from peanut allergies, according to the American College of Allergy, Asthma & Immunology — a number that adds up to more than 2.5 percent of American children who are allergic to peanuts. Peanut allergy is one of the most common food allergies in American children and reactions vary in severity, according to the nonprofit Food Allergy Research & Education. The most severe reaction is anaphylaxis, a full-body reaction of impaired breathing, a sudden drop in blood pressure, and fainting and dizziness. Without immediate treatment, anaphylaxis can be fatal.

Parents with children living with peanut allergies are recommended to avoid contact. Upon exposure, an injection of epinephrine — often in form of an EpiPen — is given and, in milder cases, antihistamines, according to the Mayo Clinic. There is no FDA-approved drug on the market to reduce risk or lessen reactions.

That could change if Palforzia is approved. The drug works by exposing children to small, controlled dosages of the protein found in peanuts until they reach a maintenance level of the protein, according to The New York Times. The treatment comes in the form of a powder that parents can then mixed into foods like apple sauce, yogurt, and pudding once per day.

Committee members voted 7-2 in favor of the drug, The Washington Post reported. "I voted 'yes' because I thought the data was quite clear, and I would actually compliment the sponsor on the extent and caliber of the studies," Dr. Ira Finegold, a professor of medicine at Icahn School of Medicine at Mount Sinai in New York told NPR.

However, concerns remained about the potential for increased allergic reactions in some cases. This sort of exposure treatment is known as oral immunotherapy — exposing the children to small amounts of peanuts in an attempt to increase their tolerance, according to The Atlantic. And while immunotherapy is commonly used in the form of allergy shots for allergens like pollen, using this treatment method with peanuts is still considered experimental. As The Atlantic explained, the fact that there is a potential for a fatal reaction — as was the case in a clinical trial in the 90s when an injection of peanut oil was tested and a patient died of anaphylaxis — is cause for concern for both parents and medical experts.

Dr. John Kelso, allergy specialist at Scripps Clinic in San Diego and committee member, told NPR that he wasn't completely sold on the new drug: "I also want my patients to have a lower risk of having reactions, but I think from the data that we have had presented to us that neither the safety nor efficacy have been demonstrated."

Though the final FDA vote is still to come, it's encouraging to know that science is exploring a possible means to treat and control peanut allergies.