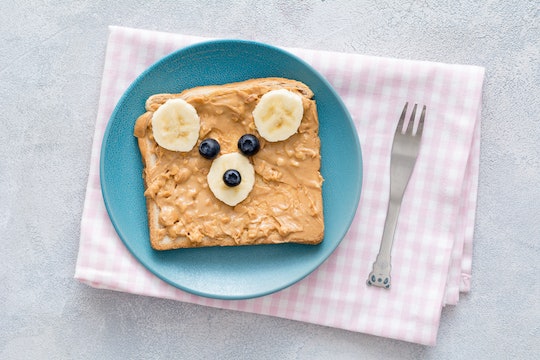 A Peanut Allergy Treatment For Kids Could Be On Its Way, Study Finds — Here's How It Works

Allergies are a serious concern for any parent who is just trying to keep their kids safe. Whether your child is allergic to things like pet dander and bee pollen, or peanuts and tree nuts, it's hard to control exactly what your child will be exposed to out there in the big scary world. But there is good news for the parents of children with nut allergies because a peanut allergy treatment for kids could be on its way, possibly saving kids from missing out on a birthday parties and school functions, due to their allergies.

California-based company Aimmune Therapeutics seems to think that it has found the treatment to help lessen the effects of peanut allergies and help kids who suffer daily, according to USA Today. This is how they researches came to their conclusion, according to USA Today: They studied 500 kids with "severe peanut allergies" over the course of six months. Some participants were given capsules of peanut flour while others were given a "dummy powder." Researchers found that 67 percent of the participants "were able to tolerate the equivalent of roughly two peanuts" by the end of the study, compared to only 4 percent who had ingested the dummy powder, according to ABC News.

Therefore, they were able to find that ingesting a little bit of peanuts through the capsules of peanut powder each day could help treat peanut allergies by helping children build up a tolerance.

While this sounds like a quick and simple solution to solving a dangerous peanut allergy, it's important to remember that you shouldn't try this exposure treatment at home. This treatment method has not yet been approved by the FDA (although the company is planning to apply for approval by the end of this year), according to USA Today, and it has not been "reviewed by independent experts." Because of this, it is important to remember, according to ABC News, that this study was "purely investigational."

In spite of the newness of this study, the findings are still huge, especially for parents who have watched their kids suffer from not being able to be around peanuts or have to taken an extra step to ensure that their food is peanut free. Dr. Stacy Dorris of Vanderbilt University told ABC News that this could mean major things:

It's exciting. This is a way to potentially protect people who are allergic from having a severe or fatal reaction. But it's not a cure...we don't know what would happen if they stop or discontinue [treatment].

A. Wesly Burks, Executive Dean and Curnen Distinguished Professor of Pediatrics at the University of North Carolina School of Medicine and principal investigator of the study agreed that these findings "hold promise" for a future approval. Burks said in a press release for the findings:

It's great to have patients go from managing to tolerate at most the amount of peanut protein in a tenth of a peanut without reacting to successfully eating the equivalent of between two to four peanuts with nothing more than mild, transient systems, if any at all.

Indeed, there are still many unknowns, but this study is still major progress — especially since, according to CNBC, there are no approved treatments for peanut allergies on the market right now. Within a matter of time, people will find out if this treatment method gets approved and will help children who suffer from peanut allergies. In the meantime, parents can feel better knowing that help for their children and their peanut allergies could be on the way.

More Like This
Viral Hives In Children: What Doctors Want You To Know
14 Recipes For Sick Kids When Everyone's Tired Of Canned Soup & Crackers
A Parent’s Guide To Stomach Pain In Kids
Do Parents Really Need To Worry About Their Gas Stoves? Pediatricians Explain
What Parents Are Talking About — Delivered Straight To Your Inbox