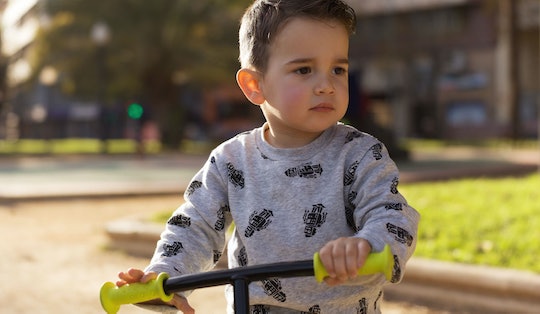 Pedestrian Deaths Are On The Rise & It's No Accident

Five days a week, I walk my 4-year-old son to school. On the way I see parents biking with their children, holding pudgy hands, and gently guiding wayward scooters. I see double-parked cars, angry commuters laying on their horns, and drivers running red lights. I see cars turning on no-turn signals and speeding through the quiet streets.

And five days a week, I see a memorial for Sammy Cohen Eckstein.

"It's really unimaginable, to kiss your child goodbye one morning and then never see him again," Amy Cohen, Sammy's mother, tells me via phone. "He was 12 years old," she continues, her voice breaking. "He was the youngest child every year in his class, so he was already in eighth grade. He was bright. He was really ambitious."

Cohen says her son was a "true New Yorker," and knew how to navigate the streets safely. A month before he was killed, he rode his bike a hundred miles for the NYC Century Bike Tour, meant to promote transportation alternatives. Every day, he walked to and from school, and to and from soccer practice, safely and carefully. But on Oct. 8, 2014, while Sammy was waiting for a friend before heading to soccer practice, a driver in a van hit and killed him. "He left home one morning and then that was it," Cohen says.

It’s a death sentence to walk into the street. And kids, by definition, they make mistakes.

Pedestrian deaths are on the rise in the United States. A 2019 report published by the Governors Highway Safety Association found that 6,227 pedestrians were killed in 2018 — the highest count since 1990. Florida has the highest number of pedestrian deaths, but anywhere we see suburban sprawl mixing high-speed roads with people on foot, there's a risk.

"It’s a death sentence to walk into the street. And kids, by definition, they make mistakes, and we don’t live in a city, or in a country, or in a culture, where they’re allowed to make simple mistakes. They're the last consideration," Eben Weiss, better known as Bike Snob NYC, tells me. "People just drive like nothing ever goes wrong, that kids don’t make mistakes, like kids aren’t there."

But people do make mistakes, and kids are there, and the popularity of large motor vehicles like SUVs — which inflict more serious damage to human bodies — coupled with distracted drivers, a growing population and, as a result, a larger number of people walking to work and school, has contributed to the 35 percent rise in pedestrian deaths over the past decade, the same GHSA report found.

"We’re not great in this country about being sensitive to people who are more vulnerable, which you see in the way we approach the streets where, you know, you drive as big a car as you want, where you want, when you want, and everybody else get out of the way," Weiss says. "Americans have a very uncomfortable relationship with vulnerability. We attack vulnerability where we should really be accommodating it."

Joseph Cutrufo, Communications Director for Transportation Alternatives, a New York City-based biking and pedestrian advocacy non-profit, believes that this can change, even if Americans are deeply tied to their cars, and to the idea of finding "freedom" behind the wheel. But he warns that a sense of entitlement puts children and families in danger.

"A lot of Americans, the vast majority, are accustomed to seeing the world through a windshield, and that’s a big problem for a lot of reasons," Cutrufo says. "Psychologically, when you’re inside your car there’s this anonymity — you know, tinted windshields, you’re sitting in a metal box, you’re isolated. The anonymity of being a driver and seeing other people around you as an obstacle or a nuisance does not, necessarily, produce goodwill on the streets."

But Cutrufo says that can change, and believe it all starts with street design.

"I think a lot of people will tell you that technology can solve these problems," he says. "But we tend to think that if you need some fancy technological solution to prevent death and serious injury on the street, you’ve designed the street wrong. If you want drivers to go slow and you want to protect people from vehicles, then you need to design the street to make it so that becomes the norm."

Vision Zero, New York City's action plan for eliminating traffic-related injuries and deaths, is an attempt to bake safe street design into the city's infrastructure. The program originated in Sweden in 1997, and has since been implemented in other parts of Europe and the United States. The campaign focuses on public dialogue and education, law enforcement, street design, and legislation as ways to combat traffic-related injuries and deaths — what Cutrufo describes as a completely preventable public health crisis.

"Streets aught to be designed for slow travel speeds and to ease pedestrian and bicyclist access and mobility," he says, with law enforcement to incentivize safe behaviors.

But many argue that Vision Zero is failing. While traffic-related deaths are on the decline in New York City, there has been a 30 percent increase in vehicle-related pedestrian deaths in 2019 over the same period in 2018.

The anonymity of being a driver and seeing other people around you as an obstacle or a nuisance does not, necessarily, produce goodwill on the streets.

Cutrufo says New York City has been doing a lot of things right, but acknowledges the pitfalls of law enforcement: "It isn’t the most equitable way to enforce traffic laws when New York City has a long history of racist policing, to put it bluntly." He also says technology alone won't solve the problem of traffic-related injuries and death.

Since less than 7 percent of drivers who cause fatal crashes are charged with homicide, and there are instances of police ticketing cyclists after cyclists have been hit, changing the idea that motorists own the streets, and updating streets to make them more pedestrian- and cyclist-friendly, is key to real, long-lasting change.

Still, according to Cutrufo, policing and technology can be useful when used with improvements to infrastructure, public education, and common-sense legislations that hold drivers accountable.

"Speed cameras are proving to both slow traffic in front of schools — because if you go 11 miles per hour over the speed limit you’ll get a speeding ticket, essentially, in the mail — and it’s reduced injuries, it’s reduced total crashes, and it’s reduced deaths in locations where they're utilized," Cutrufo says.

Automated enforcement is still flawed, though, and Cutrufo says additional legislation is needed to fill in the gaps. Currently, speeding camera tickets are issued to the vehicle, not the driver. A woman who struck and killed 4-year-old Abigail Blumenstein and 1-year-old Joshua Lew in Park Slope, Brooklyn, in 2018, had multiple driving infractions attached to her vehicle.

The Reckless Driver Accountability Act, Cutrufo says, would impound a vehicle with five infractions, making it harder for drivers who accrue speed camera tickets to continue driving. Drivers with several infractions, under the proposed legislation, could then take a restorative driver’s safety course to reduce the number of infractions attached to their vehicle.

This additional layer of accountability will also change the pervasive narrative that speed cameras are simply "money grabs": a sentiment Cutrufo says many legislators have, since they, too, drive vehicles.

We’re turning away from the word 'accident,' because not only does it suggest that crashes can't be prevented, because of course they can, but it also suggests that a driver who causes the crash doesn’t have any culpability.

"If you give it teeth, if you give it this enforceable [element], if you say, 'Well, you speed too much or you’ve run too many red lights, so now we’re going to take your car,' you can change the narrative a little bit," he says. "Now you can say, 'Hey, this actually really is about safety now, because unsafe drivers aren’t just paying for their actions, they’re losing their vehicles as a result of their actions.'"

Changing the conversation around pedestrian deaths is also essential. "Very few of the crashes that happen don’t have a named cause," Cutrufo says. "So that’s why we’re turning away from the word 'accident,' because not only does it suggest that crashes can't be prevented, because of course they can, but it also suggests that a driver who causes the crash doesn’t have any culpability, and there’s a very good chance that they do, that they were breaking the law or they were distracted for they were doing something they shouldn’t be doing."

Transportation Alternatives created the website crashnotaccident.com to help deter people from using the word "accident." When visiting the site, people can take a pledge to use the word crash, instead.

She was, you know, just the best daughter a person could have. I can't believe I have to live my life without her."

In 2013, children represented 5 percent of pedestrian fatalities, per the Department of Transportation. Eight-one percent of child pedestrian traffic fatalities occurred at a non-intersection locations, an increase from 77 percent in 2012, and the fatalities were clustered in the late afternoon and evening, when children are headed home.

"Ella was a dancer and an artist and she was so excited to be living in this diverse, really close community," Judy Kottick says of her daughter, who was 23 when a bus driver hit and killed her six years ago. Kottick met Cohen after the death of Cohen's son, and later became a co-founder of Families For Safe Streets. "She, just... she really wanted to change the world and that's partly why I'm doing this."

"She was, you know, just the best daughter a person could have. I can't believe I have to live my life without her."

The bus that struck and killed her daughter, Ella, was driving in a notoriously dangerous, five-way intersection on the border of Brooklyn and Queens, where three other people had been killed in the span of 15 years. Kottick fought for two years to get the city of New York to redesign the intersection where her daughter, and others, had died.

"We kept screaming and Judy kept screaming," Cohen tells me, her voice rising. "And we made it a pedestrian plaza and eliminated the five-way intersection. But how many people have to die before they put in place the solutions that they already know will work?"

More Like This
Can Elderberry Help Prevent Illness In Kids? Doctors Weigh In
Tips For Apple Picking With Kids
What Is RSV?
Cold Medicines For Kids: Safety, Risks & Best Alternatives