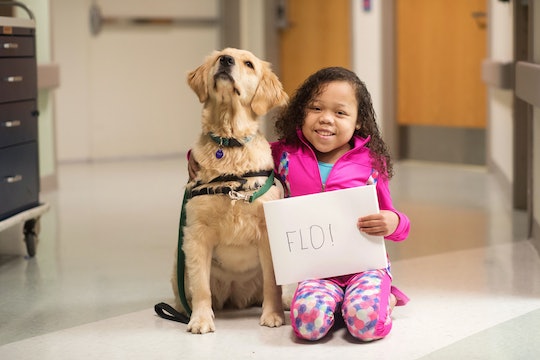 Courtesy of Children's Healthcare of Atlanta

During the holiday season, it's easy to get caught up in the stress of cooking, cleaning, and entertaining. Buying the perfect gift, avoiding awkward arguments around the dinner table — all of these things add to the stress that clouds consciousness of what matters most. And just in time for Thanksgiving, a group of pediatric patients and their families shared what they're thankful for, and their poignant responses will surely have you thinking about the important things in life as well.

This week, as part of a photo series Children’s Healthcare of Atlanta has done for Thanksgiving since 2015, the hospital shared a collection of beautiful and uplifting images featuring patients, as well as their parents in some cases, sharing what they're most thankful for this year. Jessica Pope, Children’s Healthcare of Atlanta's manager of public relations, tells Romper that while there is variance to patients' answers year over year, there are "unmistakeable trends" in what they're grateful for.

"From toddlers to teens, these kids do not give a fleeting thought to material goods," Pope says. "Their gratitude is rooted in relationships with family, as well as the nurses, doctors and other caregivers we all hope to never need."

Many of the hospital's young patients cited those around them, like 11-year-old Amari, who's been recovering from side effects associated with short gut syndrome. She's thankful for the hospital's sweet facility dog, Flo.

And Mandy, the mother of a 3-month-old named Christian who was diagnosed with congenital central hypoventilation syndrome shortly after birth. She's thankful for "everyone" at the hospital caring for her son.

Dylan, a 6-year-old currently awaiting a heart transplant and has been described by the hospital as "the unofficial Mayor of the Cardiac Stepdown Unit," is thankful for his biggest cheerleader. "My daddy," he wrote on his paper.

The parents of 3-month-old Emmie Lou — whose heart was "the size of a small strawberry" during her first surgery, according to the hospital — are grateful for the technology that enabled them to learn about their baby's heart condition before she was even born.

And 3-month-old Ezra, who spent time in the hospital's cardiac intensive care unit after coming down with rhinovirus, his family shared they are forever grateful for a nurse named Kaitlyn and her support during their son's recovery.

Another patient's mother, Minerva, expressed gratitude for her daughter, 11-year-old Guadalupe. "Thankful to have you my little warrior," her sign read.

In just six months of life, Hallie Mae, who has multiple heart defects, has already undergone heart surgery, recovery, and is now preparing to undergo yet another surgery to receive a G-tube. Her parents are thankful for both their brave little girl and the staff who has saved her.

Another patient at the hospital, 20-year-old Meagan who was born with Diamond-Blackfan anemia, a rare blood disorder that affects bone marrow, is thankful for the entire staff at the hospital who've helped and treated her over the years.

Natajge, 16, has sickle cell disease and has spent much of her childhood "in and out" of hospitals, according to Children’s Healthcare of Atlanta. Through it all, her mom has been by her side — something Natajge is eternally grateful for, writing "My mommy" on her sign.

And 16-year-old Wade, who's been diagnosed with leukemia and bone cancer, will have beat cancer twice before even graduating high school. Rather than viewing himself as unlucky, he's grateful for "God's given challenge."

While spending Thanksgiving in the hospital certainly isn't ideal, Pope tells Romper "there’s a unique kind of magic that comes to life in the hospital" on the holiday. "It’s something you have to experience firsthand to understand," she says.

"On some units, families return decades after having spent their own Thanksgiving in the hospital to provide turkey buffets for families and staff," Pope shares. "On others, leaders host lunches where family recipes are shared among staff in break rooms. Upon retirement, staff often recall holidays spent with patients as the ones they remember most fondly and vividly."

Each of these snapshots is a reminder to cherish the things that matter most this holiday season — such as family, friends, and togetherness — and to enjoy the little things that life gifts us with each and every day.