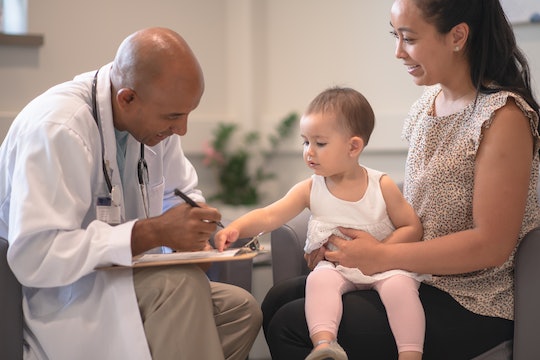 At my daughter's last doctor's appointment, we covered a lot of topics in a short period of time. Screen time, milk fat percentage, potty training — I thought we talked about everything. But one topic that never came up was if we had guns in our home. And as it turns out, my experience was actually a common one, as a new study published in the journal JAMA Pediatrics has found that pediatricians are hesitant to talk about gun safety with parents. Past studies, however, suggest that parents and patients are open to discussing the important topic with their doctors.

Once the information was gathered, researchers examined how often doctors were asking the added questions. Overall, the medical professionals asked about smoke alarms 78% of the time and guns just 54% of the time, the study found.

The study involved with 77 residents and 26 faculty working out of an academic pediatric primary-care clinic. Additionally, researchers ruled out patient ethnicity or race, level of clinical experience, and the physician's sex as contributing factors to their findings.

The researchers' findings are particularly concerning when viewed alongside statistics cited in the paper. For example, suicide rates in young people between the ages of 10 and 19 years old have continued to rise since 2008, researchers stated in their report, citing data from a separate study that examined mortality rates released by the World Health Organization. Additionally, approximately 4.6 million children in the United States, or 7% of all American kids, have access to at least one unlocked gun in their home, the researchers stated.

If someone in a position to advise parents — such as their child's pediatrician — were to intervene, researchers say those numbers could go down. "Safe storage of guns and ammunition may decrease the occurrence of self-inflicted or unintentional firearm injury to children, and interventions by pediatricians may increase safe firearm storage," the paper explained.

As for why pediatricians don't bring up guns, Stipelman suggested in a statement attached to the study that the hesitation could have to do with fear of disrupting the hard-earned trust between parents and doctors: "What it says to me is that we need to learn how to ask, and we need to have this conversation."

Parents, on the other hand, seem more comfortable broaching the subject, as past research has suggested. For instance, a study published earlier this month by researchers at the University of California at Davis in the journal Health Affairs found that most people in California, including those who own guns, believe that conversations between health care providers and patients about gun safety is appropriate when there is a gun in the patient's home. And this empowers physicians to contribute to gun safety.

"Health care providers have unique potential to recognize risk for firearm injury and — when risk is elevated and there's access to a gun — to talk with patients about safe gun practices," lead researcher Rocco Pallin said in a news release for the study. "But providers infrequently assess risk and engage with patients in these conversations in part because they think patients won't be receptive or that such discussions may alienate them. Our results suggest that these conversations are broadly acceptable, and that patients may find them most appropriate when there is specific risk."

A similar poll conducted by Parents in 2013 found that 70% of the parenting magazine's Facebook followers would not object to talking with their child's pediatrician about gun safety.

The inequity between parental and physician willingness to talk gun safety may seem discouraging at first, but it offers a unique opportunity to inform pediatricians on how and when to raise important questions.