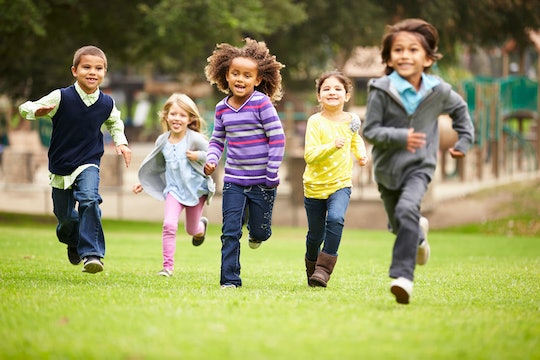 Pediatricians May Soon Be Writing Prescriptions For Your Kids To 'Play'

As a kid, I loved playing outdoors. You'd often find me riding my bike down the concrete hills of my South Brooklyn neighborhood. Or rollerblading around the block until I became tired or inevitably twisted my ankle. And at least three times a week, I was in the local park with my friends, playing handball. Now that I'm a mom, I try to let my son have as much unstructured play as possible. Unfortunately, though, the number of kids enjoying time on the playground has decrease so much so that pediatricians may soon write prescriptions for "play." Because, let's be honest, society is too obsessed with milestones and success that kids are not allowed to just be kids.

A new clinical report from the American Academy of Pediatricians has recommended that doctors begin prescribing play to children during check-ups in order to help boost their growth and development, according to The Los Angeles Times. In particular, the AAP wrote in its paper that kids today are faced with increasing academic demands, overwhelmed by technology, and juggling schedules packed with extracurricular activities that they don't have any time for play. But play, the AAP stated, is essential to building social, communication, and cognitive skills, and releasing toxic stress, The Los Angeles Times reported.

“This may seem old-fashioned, but there are skills to be learned when kids aren’t told what to do,” Dr. Michael Yogman, a Harvard Medical School pediatrician who led the report's drafting, told The Los Angeles Times. He continued:

I respect that parents have busy lives and it’s easy to hand a child an iPhone. But there’s a cost to that. For young children, it’s much too passive. And kids really learn better when they’re actively engaged and have to really discover things.

Language development is much enhanced when it involves real people and not screens.

This is not the first time the American Academy of Pediatrics has stressed the important role of play in boosting a child's development. A Pediatrics report published by the organization last year suggested that play helps promote a kid's social, physical, and emotional well-being, and improves their cognitive skills. To that end, the London-based National Literary Trust has maintained that play helps children not only make and practice new sounds, but also encourages communication, both with other children and with their parents.

More so, a 2014 study published in Frontiers in Psychology found that 6-year-old students who engaged in free play and other unstructured activities more often had stronger levels of executive functioning. That means children who enjoyed free play had better time management and decision-making skills, according to University of Colorado-Boulder researchers.

Science also shows that play helps refresh a kid's brain. The American Academy of Pediatrics wrote in a 2012 position paper that safe, supervised recess time boosts a child’s cognitive, social, emotional and physical development. How? By giving students a much-needed break from the “concentrated, academic challenges in the classroom,” according to the AAP. Recess, experts from the AAP went on to state, is not a substitute for physical education, but rather a complement to it.

In fact, a large body of research has confirmed the AAP's position: Studies show that when kids have at least 20 minutes of recess, which the U.S. Centers for Disease Control and Prevention recommends as the minimum amount of school-based play time, they become become more productive and attentive in the classroom. Not only does recess and free play help kids become better problem-solvers, collaborators, and communicators, they also help with coping skills, such as self-control and determination, according to a 2002 American Education Research Journal study.

Yet, as the new AAP clinical report noted, kids are playing less. And this isn't a recent phenomenon: The Los Angeles Times reported in 1998 that between 1981 and 1997, the amount of time kids spent playing nosedived by 25 percent, based on research at time. Plus, many schools withhold recess as a form of discipline despite scientific research proving its benefits, which means students are losing precious time on the playground.

Pediatricians shouldn't have to prescribe kids play time. That is something that parents, including myself, should make a conscious effort to give our children. Success can't be guaranteed by academics and extracurriculars alone. Kids need to be kids, so they can appreciate life as adults.

More Like This
What Parents Need To Know After DEA Issues Warning About "Rainbow Fentanyl"
New Report Shows 80% Of Pregnancy-Related Deaths Are Preventable
What Is RSV?
How To Get Boogers Out Of A Baby's Nose