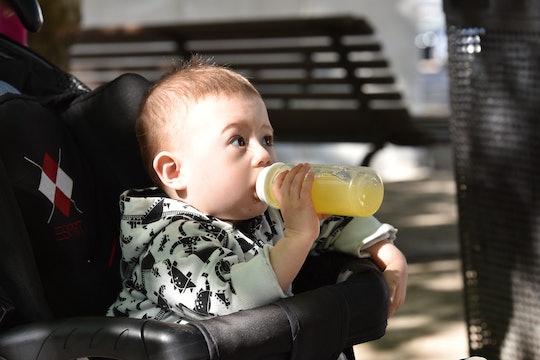 Many parents are familiar with the struggle of kids who are picky about what they eat, but kids can also be pretty picky about what they drink. While one of the go-to beverages for tots has long been various fruit juices, new guidelines from the American Academy of Pediatrics has changed the recommendations for juice consumption by kids. Pediatricians say children under 1 year old shouldn't drink juice — and older kids should only have it sparingly.

Fruit juice has been a dietary staple of childhood for decades, though experts have often been dubious of its health benefits. Kids tend to like juice, and not put up too much of a fight about drinking it, because most fruit is naturally sweet. Of course, many juices on the market also have added sugar, and some have more sugar per serving than a can of soda. This is where pediatricians have started to worry: in recent years, research about the longterm effects of sugar consumption in childhood have linked excess sweet stuff to a slew of health problems: everything from poor dental health to obesity and the development of serious health conditions in adulthood, like diabetes. While it's always important to note that these studies are correlative, and not causative, and there are many factors that contribute to any of these outcomes, researchers advise looking at factors that can be controlled (like diet) and making changes to offset the ones that can't (like genetics).

The American Academy of Pediatrics published updated guidelines for juice consumption by kids in various age groups in the May issue of the journal Pediatrics. This is the first time the group has updated the guidelines since 2001. The organization undertook a review of more than a decade of research and statistics on child health, according to CNN. It's also important to note ahead of the new recommendations that the organization only recommends 100 percent juice for any child, regardless of age: "juice drinks" or "juice cocktails" are required to state what percentage of real fruit juice they are, but they are also most often loaded with excess sugar and other flavors, as the academy noted in its paper.

The academy further recommends that fruit juice only be given as part of a meal or snack (preferably saved for "special occasions") and never as a replacement for real fruit, which is more nutritionally beneficial. In fact, the academy believes that there is no nutritional benefit of fruit juice in children less than 1 year old, and that the longterm associated risk of things like dental cavities outweigh any negligible benefit.

The Centers for Disease Control and Prevention reported in 2014 that while children are eating more fruit than in previous years, their overall intake is still less than recommended. It's even lower for vegetables. For parents who are struggling to find ways to get their kids to eat their fruits and veggies,former First Lady Michelle Obama's Let's Move! campaign offers many ideas and strategies to help the whole family get excited about healthy eating.