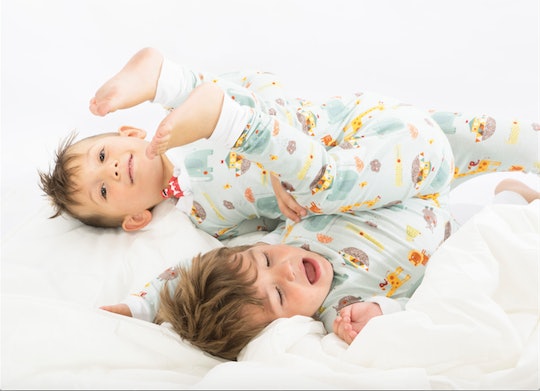 PSA, Parents: "Peejamas" Are A Thing, & They Could Solve Your Kid's Bedwetting Problem

Think the only potty-training alternative to a diaper is a Pull-Up? So did one father of a bedwetter — but he was dissatisfied with that, so he invented something better. A new product in the world of diapering is slowly trickling onto the market, and its inventor thinks it could solve the bedwetting dilemma. Enter Peejamas, highly-absorbent pajamas designed for bedwetting toddlers.

In a Kickstarter video, Craig Hammond, founder of Peejamas, explained that he was inspired to come up with Peejamas because of his 2-year-old son. He was totally potty-trained during the day, but would often still wet the bed in his sleep.

“We had this dilemma: do we use the crutch of a diaper and put him in it and guarantee that he's gonna pee and not learn faster?" Hammond said in the video. "Or do we roll the dice and not put him in a diaper and possibly wake up to wet sheets, and a stained mattress, and worst of all, me and my wife in giant puddle of his pee?" When Hammond woke up in a particularly huge puddle of his 2-year-old's pee one morning, he knew there had to be a better way. He spent weeks investigating fabrics that would be absorbent enough to prevent giant urine puddles, but were also discreet enough that his child wouldn't realize he was wearing a diaper alternative, which would hopefully teach him to stop wetting the bed.

Hammond found no such product on the market, so he invented Peejamas. The product seems to have multiple benefits, as detailed on its Kickstarter page. At $35 a set, Peejamas are 66 percent more affordable than nighttime diapers, which are typically more expensive than regular diapers. Additionally, when parents put their kids in Peejamas, they will be deprived of the diaper safety net, giving them motivation to stop wetting the bed. Not to mention, once a child overcomes bedwetting, they can continue wearing Peejamas — unlike those extra diapers parents would have laying around otherwise.

Furthermore, Peejamas drastically reduce the chance of a parent having to change and wash their kid's sheets in the middle of the night. If a child wets the bed, the wetness is contained to the Peejamas, meaning parents only have to wash two items.

And finally, Peejamas are much more sustainable than diapers. According to a 1998 study by the Environmental Protection Agency, around 18 billion disposable diapers go to landfills every year, as reported by ABC News. Overall, diapers made up 2.1 percent of the United States' landfill garbage (that's 3.4 million tons of waste) in 1998. In a landfill, disposable diapers are estimated to take at least 500 years to decompose, as noted by Livestrong, all the while emitting harmful greenhouse gases that can contribute to health problems like asthma, according to Ensia.

Hammond's original goal was to raise $10,000 on Kickstarter, and as of March 15, the project has garnered $52,483 from backers. The Kickstarter will continue accepting donations through the end of March, so there's still time to be an early backer and get a pair of Peejamas (or a few) from the first factory order.

And since Hammond exceeded his fundraising goal, he was able to expand the sizes offered in Peejamas' first factory run up to 7T (they originally only went up to 4T). As multiple people pointed out in the comments section on Kickstarter, some children continue to wet the bed due to disabilities, autism, and for a number of other reasons well past the age of 4. Hammond listened to their feedback, and with the additional money that was pledged, he decided to add more inclusive sizing. The first round of Peejamas are estimated to be ready in July 2018 — so if you have a child struggling with bedwetting, fear not. Peejamas are just four months away.