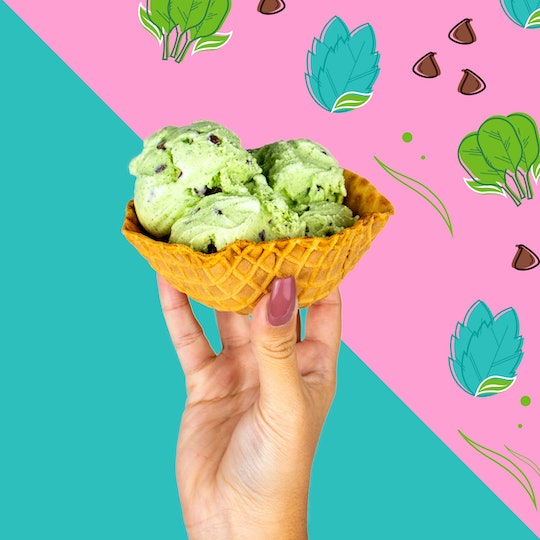 Parents of picky eaters: does your child go into hysterics if you put a single piece of cauliflower on their plate? Throw a full on temper tantrum if a spinach leaf touches their mac-and-cheese? Maybe you need some ice cream with veggies hidden inside (and a whole lot of patience). I know, it sounds silly, but hear me out. Getting your little one to eat their vegetables and enjoy a balanced diet can be a frustrating exercise for many parents. Having been there myself (we still have issues with zucchini and squash), I really do think I may have an answer for stressed out parents at dinnertime: ice cream with veggies. Sound intriguing, and perhaps, slightly bonkers? I thought so, too — at first.

Peekaboo Ice Cream, with "veggies in every bite," was created by Jessica Levison, a busy mom of three picky eaters, while running Serendipity Creamery and Yogurt Cafe, an ice cream shop in Miami, Florida. Feeling frustrated with the "eat your veggies" argument night after night, Levison tells Romper, "I began experimenting with hiding veggies in my kids’ ice cream and slowly perfected the consistency, taste, and veggie pairing in each of our signature flavors. At the end of the day, life is about balance and compromise. I was able to get my kids to eat more balanced meals at dinnertime, knowing they would be rewarded with Peekaboo Ice Cream after dinner. See how I did that? I got them to eat veggies for dinner and dessert." Ummm... could someone give this lady a Mother of The Year award, please?

With five flavors to choose from, Peekaboo Ice Cream has everyone's taste buds covered. Using nutrient-dense and mild flavored (or sweet) veggies, current flavors include cotton candy with hidden beets, vanilla with hidden zucchini, chocolate with hidden cauliflower, mint chocolate chunk with hidden spinach, and strawberry with hidden carrots. Also, as Levison looked for veggies with visual appeal, it was an added bonus that a couple of the veggies chosen, beets and spinach, are veggies that most kids never want to touch.

The hidden vegetables in Peekaboo Ice Cream are rich in vitamins, fiber, iron, and calcium, among others, and guess what? When mixed with delicious creamy organic ice cream, you'd never know in a million years that there's spinach mixed inside that mint chocolate chunk. Leave it to an enterprising mom to figure this out and share it with the rest of us.

Now, obviously finding ways to get your child to like vegetables should still be a priority. Cooking vegetables a different way, making them more interactive (like dipping a pepper into hummus, for example) and combining a vegetable with a favorite dish are all ways parents can eventually win The Battle Over Broccoli. Patience, however difficult, can also go a long way. In an interview with NBC News, Lee Gibson, PhD, advises that a child's picky eating habit is actually quite normal and something they may grow out of on their own. I still find it funny (and a relief) that my daughter now loves cucumbers after detesting them as a toddler.

But here's the thing. Sometimes the patience runs out, and on a busy school night, with a long To Do list still ahead of you, sometimes you just don't feel like arguing with a stubborn kid who won't eat his salad. Now, armed with Peekaboo in your back pocket (or the freezer, in this case), you can stop arguing and alleviate that stress. Knowing there's a little bowl of ice cream in their future can make negotiating the number of carrots they'll eat that much easier.

Curious to try it yourself? Find Peekaboo ice cream ($10/pint online; $5.99-$6.99 in store) by using their store address locator or by purchasing online.