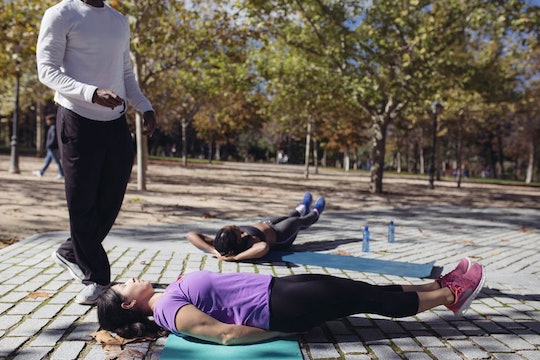 Kegels Might Actually Make Things Worse For Some Women After Birth

While pregnant, I received plenty of unsolicited advice. Complete strangers generously shared their opinions on everything from breastfeeding to epidurals. But one thing no one talked to me about was my pelvic floor. Working in fitness for eight years, most of my pelvic floor knowledge revolved around the fact that the pelvic floor can become weak, and that kegels are the key to strengthening it.

After I had my daughter, I noticed that my pelvic floor was ah, different. And by different, I mean I was rendered somewhat incontinent. Sneezing, coughing, running, and jumping were just about guaranteed to make me pee myself. My recurring nightmare transformed from falling off tall buildings to bouncing on a trampoline.

As a Pilates instructor, I knew this shouldn’t have been happening. Years of cueing clients to engage their abdominals and pelvic floors told me that something was very, very wrong. I tried doing kegels. Lots and lots of kegels. I kegeled in the morning, kegeled in the evening, kegeled at suppertime. Every time I tried to find some sense of engagement, it felt like television static. My muscles knew that they should have felt a sense of engagement and lifting. But there was nothing.

Most of my kegel 101 information had come from years of reading women’s health magazines and clickbait Facebook articles. They told me that women are running amok with loose pelvic floors and enduring subpar sex lives, incontinence, and a host of other unpleasant symptoms because of this laxity. The pelvic floor muscles help support your internal organs and can become weak for a variety of factors, most notably childbirth, obesity, and age.

Kegels are presented as a panacea for pelvic floor dysfunction. Women across the world are doing kegels as we speak, the effort in their collective contractions enough to light up Midtown Manhattan.

My non-scientific sources informed me that there was a solvent for these pelvic floor woes: Kegels. Kegels are done by repeatedly squeezing and relaxing your pelvic floor muscles for up to several minutes, multiple times a day. Think of engaging the muscles you use to stop yourself from peeing. Kegeling religiously can help strengthen those muscles. Kegels are presented as a panacea for pelvic floor dysfunction. Women across the world are doing kegels as we speak, the effort in their collective contractions enough to light up Midtown Manhattan.

Unfortunately, kegels are not the be-all and end-all solution they’re touted to be. In fact, not only will they not solve many postpartum pelvic floor dysfunctions, but in some cases they can also make them worse. Dr. Joanne Wolf, physical therapist and pelvic floor specialist at Hummingbird Physical Therapy in D.C., explains by phone that “kegels won’t help if your pelvic floor is too tight. If it’s too tight, kegels are the last thing you should be starting off with. They’ll just make it tighter.”

Pelvic floor specialists, such as Wolf, treat a variety of pelvic dysfunctions, many of which can occur after childbirth. An estimated 24 percent of women experience some form of pelvic floor disorder, according to a 2014 study published in Women’s Health, and vaginal birth is a key risk factor.

After I realized my constant kegeling was ineffective, I finally found help when I saw a pelvic floor therapist who, in my opinion, should be canonized. She realized the issue was that my pelvic floor musculature was too tight, and advised me to immediately stop any and all kegels. Instead, she worked on loosening my muscles. Once they were properly released, we then strengthened them with variations of kegels, including long holds to work on my pelvic endurance, and short bursts to help me hold everything in when I sneeze.

Many women similarly struggle and don’t know where to turn. A few months after her c-section, Karen* began feeling an ache in her lower abdomen. She was diagnosed with interstitial cystitis, essentially a blanket term for bladder pain. She did kegels to try and alleviate this pain. “Literally everyone recommended kegels until I got to pelvic floor therapy,” she says. “Kegels are meant to strengthen muscles. My muscles or tendons or whatever sort of tissue is affected by my condition were all super tense and kegels would’ve just compounded that. A lot of doctors will recommend kegels as a cover-all to pelvic dysfunction.”

Doing kegels when the pelvic floor is too tight won’t reduce the pain unless the tightness and other biomechanics are addressed first.

Karen went to pelvic floor therapy 12 times total until her insurance stopped covering the sessions. She said it was the only thing that gave her relief. The therapist’s theory is that scar tissue from Karen’s c-section adhered to her bladder, creating the pain she experiences. She says the tension from the pain gives her headaches, and that she wakes up in pain every morning from holding the contents of her bladder overnight, with her lower abdomen feeling like “it’s on fire.”

Wolf echoes Karen’s story, saying, “I always hear, ‘I’m doing kegels, I don’t know why I’m not getting better.’” Pain is one of her patients’ most common symptoms, and “doing kegels when the pelvic floor is too tight won’t reduce the pain unless the tightness and other biomechanics are addressed first.”

Karen hasn’t gone back to pelvic floor therapy since her insurance stopped paying for it. She’s hesitant to try and go back because she wants to conceive a second child and it feels pointless. “I’m sure pregnancy will be a challenge, but sometimes you gotta do what you gotta do.”

Melanie Coerver first realized she had a pelvic floor issue at her six-week postpartum checkup, when she asked her doctor if it was normal that she peed when she sneezed. Her doctor casually responded that “some things will never be the same.” Melanie says, “I think she was trying to be nice, but there was really a heavy dose of shame about that.”

Coerver recounts that after she lost control of her bladder a couple times, she saw an OB-GYN who recommended kegels. “My husband and I came up with an elaborate schedule to get my kegels in,” says Melanie. “I had to concentrate so hard to do them correctly. I would lie in a closet in our house that blocks out the noise and just focus on them.”

The kegels didn’t help and Melanie went to go see a pelvic floor therapist, which she says helped marginally. She has since been to numerous specialists to try and get a definitive diagnosis. “The overarching theme of all this has been disheartening,” she said. “Along the way I’ve had all these people and doctors tell me ‘this is what’s going to fix it.’” The last specialist Melanie saw said that the issue could be that her urethra spread out during her delivery. If that prognosis is correct, she will have collagen injected into her urethra to plump it up. “It’s so hard,” she said. “I don’t want to live my life around this problem. But it’s really hard not to because it affects everything.”

Even when kegels are an appropriate solution to a pelvic issue, “90 percent of people are not doing their kegels right. They’re compensating with their adductors, and every other muscle [besides their pelvic floor muscles]” says Wolf.

Postpartum pelvic floor dysfunction does not get enough attention and many women still suffer in silence without receiving proper treatment. Today, because of my pelvic floor specialist, I am able to jog and sneeze without peeing. I no longer enviously gaze at runners sprinting by, amazed at their dry running shorts. I am so grateful for the help I received, when so many women go without appropriate treatment and support.

*Last name has been withheld.