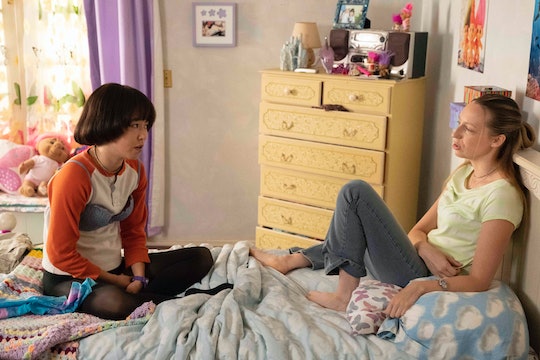 Hulu's PEN15 had me hooked in the first fifteen seconds, because that was all it took for me to recognize myself onscreen. Hearing the sweet refrain of a Mandy Moore song play while two besties gabbed about the juiciest summer gossip? It was better than a time machine. And that feeling of recognition continued throughout all ten episodes, because PEN15 is your 7th grade experience in a nutshell. It's awkward and uncomfortable sometimes, but the thrill of new discoveries is the silver lining on the pimpled cloud of puberty.

PEN15 takes an unconventional approach to its surprisingly honest look at adolescence. Series creators and stars Maya Erskine and Anna Konkle play the thirteen year old versions of themselves on the show, even though they are decidedly not thirteen. The rest of their classmates are played by actual middle schoolers, which heightens the comedy of the situation while driving home the larger point of the series: that the experiences you have when you're young really do stick with you forever. The show bridges the gap between childhood and adulthood, both literally and figuratively.

And watching it can make you feel like you're right back in middle school. I was a little younger than Maya and Anna in 2000, but almost every pre-teen triumph and unexpected ache rang true.

When Maya pasted cut-outs of teen heartthrobs (Josh Hartnett!) onto her binder, I could practically hear the printer cranking out the poor resolution pictures of [name redacted] that I would Scotch-tape to mine. And who hasn't tried to give themselves a haircut and had to turn up to school on Monday looking like you lost a fight with a lawn mower? I distinctly remember one 7th grade acquaintance who tried to "cut bangs" and ended up rocking a Jimmy Neutron quiff until it grew out.

PEN15 nails the little things about coming of age in the new millennium, like writing on yourself with gel pens, passing circle-yes-or-no love notes, and the proliferation of thongs. But it captures the big stuff with just as much humor and sensitivity. Discovering your body with equal parts elation and shame. Realizing your parents are fallible and that you're at the whim of their decisions. Torturing yourself over a crush. The inexplicable and careless cruelty of other children. The saving grace of best friends — and the ridiculous fun you could have with them while doing absolutely nothing.

Every episode contains the push-pull between adulthood and childhood. In "Miranda," Maya and Anna have to decide whether to honor their weekly playdate (which involves acting out elaborate soap opera storylines with Sylvanian family toys) or hang out with the cool girls who smoke in the bathroom. Part of them wants to remain in the innocence of childhood but they also crave the excitement of make-out parties that they're not quite ready for. Personally, saying goodbye to my Barbies was a hardship I have never fully recovered from.

It's so easy to slip into Maya and Anna's shoes that sometimes I had to close my eyes rather than suffer secondhand through a familiar embarrassment. When Anna asks her crush to dance in the final episode and he flatly turns her down, I was transported to the bar mitzvah where I danced briefly in the direction of my own crush — only to get wholly rejected when my "Want to go out with me? Yes / No" note didn't go over well in the following Monday's Spanish class. (He had frosted tips because it was 2003, so ultimately I was the winner there.)

Though PEN15 is hilarious, it doesn't shy away from the pain and trauma that goes hand-in-hand with growing up. Becoming an adult is hard and it hurts, but it's something we all go through. And PEN15 will let you remember and revisit while still feeling enough distance to shake your head and laugh.